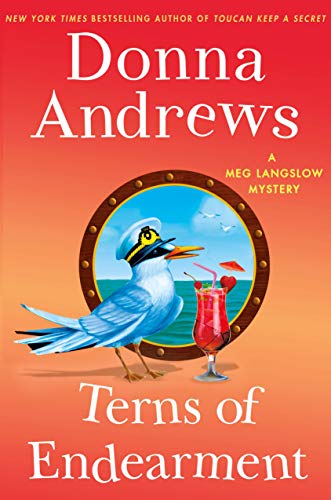 Donna Andrews has done it again: served up another amusing and intelligent adventure in her Meg Langslow cozy mystery series—now up to volume 25.

In this new case, Meg accompanies half her family and associates on a cruise to Bermuda. Her grandfather, a renowned (and . . . shall we say . . . colorful) wildlife and environmental expert, has been hired by a new cruise line to give lectures on the trip, and he arranges for his clan and employees to sail along with him. Once they reach the island, he will give walk-and-talks to passengers about Bermuda’s flora and fauna, while the family gets a vacation.

Instead the ship breaks down in the Bermuda Triangle, leaving everyone adrift for several days without power or communications—and a killer onboard.

It’s not obvious right away that murder has been committed. At first it looks like a suicide, when an infamous author is discovered missing and only her accessories and a note are left behind on the deck. But nobody can go looking for a body gone overboard, nor can they call for help, because of total systems failures on the ship.

It all adds up wrong, and Meg becomes suspicious. While helping the other passengers cope with spoiling food and failing toilets in the tropical heat, she snoops around. She worries, too, about another missing person—her grandfather’s assistant, who appears to have been left behind on the docks and can’t be reached for an explanation.

Meanwhile, the ship’s captain is exposed as a useless drunk, and his staff as either belligerent or inadequate. The situation escalates rapidly out of control.

But here’s where Meg’s years of experience in herding cats (that is, the large and eccentric cast of characters who have accompanied her through the series) pay off. She catalyzes a passenger revolt to take over the ship from its hapless crew and restore power and communications. At the same time, her super-organization skills and nosing around provoke the criminals into revealing themselves, and the case is solved just in time.

Oh—and of course—there’s a bird. All titles in the series are a play on words involving a bird, so in this book there must be a tern. It proves to be an injured tern hanging around the ship for food because it can’t fish for itself. Its presence is only token, however, a requisite appearance to sustain the title theme. One can’t help but wonder if the author has a list of bird wordplays that trigger story ideas, or if the stories come first then a bird is worked in.

Similarly, one of Meg Langslow’s key traits, her professional occupation as a blacksmith, has faded into the background over time, replaced by her sleuthing and administrative abilities. It’s easy to forget she ever had a smithing history until the author drops in mention now and then.

These elements don’t matter. At this point people read the novels for the engaging characters and smooth, snappy writing, and welcome whatever the author comes up with for plot.

Such are the hallmarks of a successful series—volume after volume of reliable entertainment, plausibly presented despite some wacky situations and characters. Wackiness, indeed, is part of the series’ charm, and all fans hope the author will keep cranking ’em out indefinitely. Terns of Endearment should keep them satisfied until the next one is published.