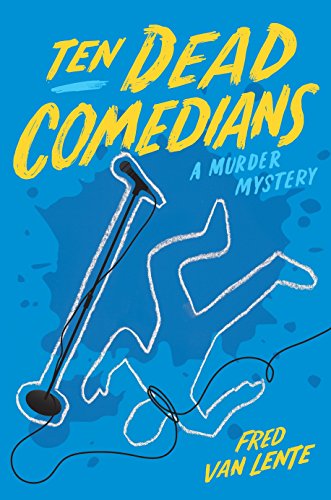 “[this] debut fiction could possibly become, in its own way, as much of a classic as the novel it honors.”

Comedian Dustin Walker became a legend; then his star reached its zenith and went dark, while others associated with him began their own ascent.  Later, those same people, now comedians in their own right, are invited by Walker to visit him at his home on a remote Caribbean island, to talk about “a project.”

For various reasons, each agrees to attend.

When the ten arrive, they are met by Walker’s assistant and taken by boat to the island.  Once there, they discover the estate is deserted. The caretaker has disappeared, and Walker is nowhere in sight.  In the lounge, framed pictures of the ten decorate the walls, and on the TV, a video is playing . . . Dustin Walker, announcing he’s going to kill each one for insults both real and imagined. Then he hangs himself . . .

At first, they think it’s just a joke, a bit of camera magic, until one reminds them:

And then the first death comes. It’s obvious with Walker dead, one of the ten is killing off the rest, but why?

After that, it’s chaos and panic, in which old hatreds, new associations, and real annihilation face the surviving funnymen. The island is booby-trapped, there’s no outside communication, and all available food has been poisoned.

Inevitably they turn on each other, because no one trusts anyone else, and none of them will admit to being the killer . . . even as the group is decimated, and the deceased member’s picture disappears from the collection.

The observant reader will immediately recognize the parallels between this novel and Agatha Christie’s And Then There Were None, and the resemblance is intentional. With inserted monologues from each comedian’s routine serving as obituaries, the characters are given such detailed backgrounds one might almost believe they are patterned after real-life personalities. They also generate sympathy, and there are several whom the reader may actually hope survive.

This is a smoothly flowing narrative with suspense, rapid one-liners, and a twist on the expected ending.

As an homage to Miss Christie’s famous novel as well as a show-biz satire, author Van Lente’s debut fiction could possibly become, in its own way, as much of a classic as the novel it honors.