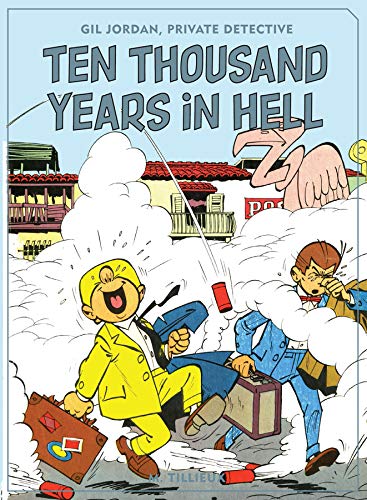 “Mystery lovers will certainly relate to the adventures of Jourdan and Crackerjack, while kids can easily take to this novel’s humor and carefree attitude.”

When it comes to comic books written in French, or when it comes to the very notion of a French-speaking Belgian comic book artist, almost everyone will immediately think of Tintin and artist Hergé (real name Georges Prosper Remi).

However, the Franco-Belgian ligne claire style, which mixes clean, clear lines with warm colors and a joy for life, inspired numerous comic book creators in the late 1950s and early 1960s. English-speaking audiences almost certainly know Asterix, the funny book created by Frenchman René Goscinny. Now, thanks to Fantagraphics, they will get to know Gil Jourdan, Crackerjack, and writer-artist Maurice Tillieux.

Jourdan is a boyishly handsome private investigator in Paris. Unlike other Gallic gumshoes, he is neither hard-bitten (a la Nestor Burma) nor a humdrum everyman (a la Maigret, who makes an appearance in this volume). With his Bachelor of Law degree, Jourdan is a whip smart PI who solves crimes in a stylish blue suit and red bow tie. His main sidekick is the ex-con Crackerjack, a schlub who enjoys good food, good wine, and a bad joke. Finally, rounding out the trio is the professional detective Inspector Jules Crouton, a cop who is more mustache than man.

In the first story of Ten Years in Hell, Jourdan and Crackerjack are hired to bring back a French inventor who has been kidnapped by thugs loyal to the South American dictator Calderon. Calderon wants the inventor’s new ultrasonic gun system that could allow his tiny army to defeat both the Federal Republic of Brazil and the French Foreign Legion stationed in French Guiana. During their escape from an attempted arrest, Jourdan and Crackerjack are hit with mortar shells full of laughing gas. This long-acting drug forces Crackerjack to laugh through the subsequent trial, thus earning him and his boss a ten-thousand-year sentence in the desert prison camp of Xique-Xique.

As luck would have it, the French inventor is also in the camp. What follows is a fun escape tale that sees the plucky cast of Europeans outmatch Calderon’s army. The only things that they cannot get the better of are all the melons.

In this novel’s second story, “Boom and Bust,” a cryptic letter delivered to the wrong address helps Jourdan, Crackerjack, and Crouton to stumble on an elaborate bank heist plan in rural France.

“Boom and Bust” combines two excellent narrative tropes taken right from Sherlock Holmes: the secret tunnel of “The Red-Headed League” and the threatening black dog of The Hound of the Baskervilles. Slap these together with humor and a gang of crooks who have perfected the art of the controlled explosion, and you have one heck of a story.

Ten Thousand Years in Hell is the type of fiction that can be enjoyed by all ages. Mystery lovers will certainly relate to the adventures of Jourdan and Crackerjack, while kids can easily take to this novel’s humor and carefree attitude. M. Tilieux and his whole generation of creators helped to turn comics into art long before the mainstream literary establishment caught on. In Ten Thousand Years in Hell, one can see why European comics threw off the shackles of “For Kids” so long ago.