Tears Over Russia: A Search for Family and the Legacy of Ukraine's Pogroms 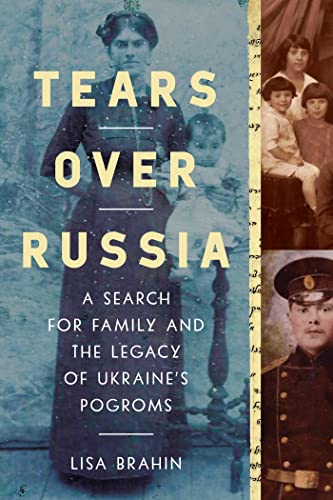 The pogroms of Russia have long served as the backdrop to bigger stories. They are the reason for the family’s plight in Fiddler on the Roof or as author Lisa Brahin so aptly puts it in her book Tears Over Russia: A Search for Family and the Legacy of Ukraine’s Pogroms a “prelude” to the Holocaust. Rarely it seems have the organized massacres of Russian Jews during the early 1900s merited their own narrative. Brahin remedies this by chronicling her Jewish ancestors’ experience of fleeing persecution in what is today Ukraine.

That the book comes at a time when Ukraine’s past treatment of its Jewish population has become part of a larger political debate can be viewed as both fortunate—for drawing further attention to the story—and unfortunate: if in the wrong hands it is used for fodder to justify war.

Brahin is not a politician but a genealogist and researcher focused on adding to the limited study of a crucial period in the history of Jewish life in Russia and Ukraine. Her account is filled with the details and trivia that bring the past to life, such as the absurdity of the United States monthly quota for immigrants arriving at Ellis Island.

The ship on which Brahin’s relatives reach the United States either enters the country in the last seconds of August 31, 1923 or the first of September 1, 1923, a discrepancy that almost causes them to be sent back to Europe. Little details like this help readers understand the bureaucratic maze that United States immigrants must navigate. Other everyday snippets about life in rural Russia, present-day Ukraine, while intriguing, can at times cause the text to lose momentum, such as when a group of children forget a chore. Yet in a historical text like this it is better to have too many anecdotes than not enough.

Relying on written, oral, and visual documentation Brahin recounts the numerous pogroms inflicted on the town of Stavishche and surrounding regions between 1917 and 1921 when, according to the author, an estimated 100,000 to 250,000 Jews were killed in Ukraine. At the center of the narrative is the story of her great grandmother and grandmother and their escape from Stavishche along with many relatives and neighbors.

Her grandmother, Channa Caprove, was born near Stavishche in 1912, later telling the author bedtime stories about her childhood including the beauty of lilacs blossoming at a grand country estate and the horror of mob violence. At times the brutality of the killings and the historical distance can lead to overarching cliches. Brahin’s writing is strongest when she simply shows how the horrendous has become ordinary as she does when describing Channa’s baby sister Fay’s death.

“There was a place nearby where they made the little coffins.”

The accounts of Channa and her immediate family form the core of the narrative, and it seems almost like an interruption when vignettes of other family members intrude. Only later when “American hero” Barney Stumacher enters the picture does it become clear how crucial the larger community context is to the family story. A distant relation of Channa, Stumacher manages to lead not only his immediate family—including an 80-year-old blind aunt—but 80 individuals out of Ukraine and toward the Golden Land (the United States). It is here that the story gathers momentum as a single story, not a series of vignettes stitched together. Each character who has been introduced is followed in America, bringing the story full circle.

Because the story focuses on the pogroms and one community and family’s experience in them, the larger picture of what is going on in the region aside from quick mentions of the revolution and the Red and White armies is given little space.

In the end the author has done a service to her grandmother and society by recording the stories of Channa and other Stavishche residents.

“Their accounts painted a portrait of the town, bringing light to an entire group of people who lived so long ago.”

In Tears Over Russia Brahin has ensured that the light will stay on.