The Tea Planter's Wife: A Novel 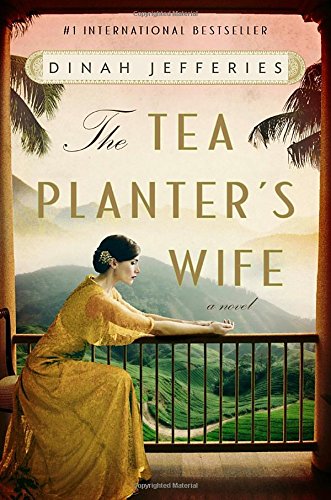 “Dinah Jefferies uses the secrets held by a husband and wife to expose the prejudice and unfairness of the British colonial era. . . . an enjoyable read.”

Love, suspense, guilt, and hidden secrets with an underlying theme of race relations seamlessly blend together in a timeless story of an innocent young Englishwoman struggling to find her place in colonial Ceylon against unexpected circumstances and facing cruel choices.

Nineteen-year-old Gwendolyn Hooper, newly wed to Laurence Hooper, a handsome and very successful tea planter, arrives in Ceylon expecting to be met by her husband. Instead she finds herself alone on the dock and feeling very much out of place.

“Nothing had prepared her for the shock of Ceylon’s scorching heat, nor its clashing colors, nor the contrast between the bright white light and depth of the shade. Noise bombarded her: bells, horns, people, and buzzing insects surrounding her, swirling and eddying until she felt as if she were being tipped about like one of the pieces of flotsam she’d been watching earlier.”

Savi  Ravasinghe, a young Sinhalese man, directs her to a hotel lounge to wait for Lawrence, but does not wait with her even though he admits to knowing Laurence. The hotel is a gathering place for the British; dark-skinned natives are not welcome.

Comments are easily overlooked, but they are subtle hints of underlying themes. Gwen notices the heavy scent in the air that Savi identifies as flowers, but it was more than that. “Beneath the seductive scent there was an undercurrent of something sour.”

Savi dismisses the sour smell as bad drains, and Gwen nods. “Perhaps that was it.”

Later Savi points out a monk attempting to purify a place where “great evil may have transpired at that spot, or at the very least a death. . . . In Ceylon we believe in ghosts.”

When Laurence arrives Gwen tells him that she has met Savi, who was very kind.  Laurence frowns but says nothing. He doesn’t need to; Gwen feels his displeasure.

After a night of passionate lovemaking at the hotel, Gwen and Laurence travel to Laurence’s plantation where their relationship takes a different turn. Laurence  is distant when he joins her in bed, often staring at her as if she is a stranger.

Warned by Laurence “to stay away from work matters” for her own safety, not to wander unaccompanied, and only allow Naveena, the Sinhalese servant woman to see her in her nightgown, Gwen feels like her husband is treating her like a child.

Vowing to be the best wife she can be, Gwen plans changes to the plantation: a vegetable garden and a gazebo. But there are secrets she uncovers that make her uneasy, first among them is a child’s grave  hidden in the woods with only a first and middle name on the tombstone—no dates, no last name.

Then Gwen finds a trunk of carefully wrapped baby clothes and a yellowing dress. Do these clothes belong to the child buried in the woods, the child Laurence says is Caroline’s, Laurence’s first wife. Why is the child not buried with his mother, and why does Laurence not claim the child?

While not ghosts in a supernatural sense, the child and Caroline seem to haunt Laurence, but he will not answer questions, and neither will anyone else on the plantation.

Adding to Gwen’s fears are Laurence’s friend, Christina, a beautiful widow who owns Ceylon’s largest bank, and is far too flirtatious with Laurence, as if the two of them share a relationship Gwen knows nothing about. Another woman who demands Laurence’s attention is his sister Verity, one of the novel’s more malicious characters.

Angry at Laurence’s attention to Christina at a party, Gwen drinks too much and is helped to bed by Savi Ravasinghe. She wakes to find herself partially undressed but can’t remember anything beyond Savi helping her to her room. Had he acted inappropriately? She does not know.

When Grew becomes pregnant both she and Laurence are excited by the coming child. As she approaches the time of the birth, Laurence leaves on business, leaving her to Verity and the servant Naveena. Verity announces she must attend a party and leaves, to Gwen’s relief.

Later that night Gwen goes into labor with only Naveena to help her. With being safely delivered of twins, a boy and a girl, Gwen must now make a horrible decision. If she wants to save her marriage and avoid shaming Laurence and well as being shunned by British society in Ceylon, she must do something she abhors, and which will leave her with guilt for the rest of her life.

The Tea Planter’s Wife echoes some of elements of the classic novel, Rebecca, but with a more fragile character in Gwen and with a wider focus. This is more than a novel of the deadly resentment of a servant because a new wife is taking the place of her former mistress. Dinah Jefferies uses the secrets held by a husband and wife to expose the prejudice and unfairness of the British colonial era.

Although many younger readers may wish Gwen was more feisty and less prone to fits of crying, Jefferies stays true to the times and the customs of social behavior. All in all The Tea Planter’s Wife is an enjoyable read.