The Tale of a Niggun 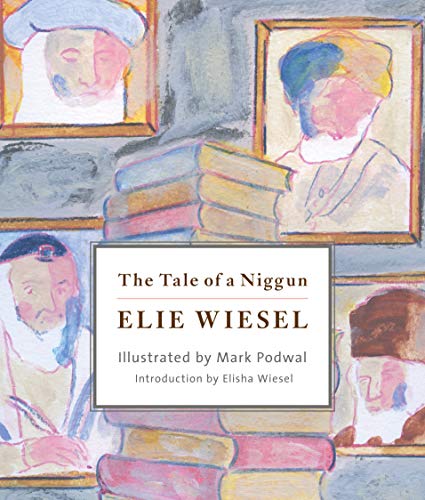 We’ve all, at some point, had this experience:  tidying up, digging around, cleaning out the drawers, or  fussing about the attic, we find . . . something, a relic we’d forgotten or discarded, something old that, with our new eyes, is born again and given new meaning.

For some people, it’s old socks or a tarnished candelabra. In the Wiesel house, it’s the makings of an entire book, plucked from the cobwebs. The Tale of a Niggun was fished out of a packet of 1970s essays by a Jerusalem bookseller who knew Wiesel for decades; even the great author’s son, Elisha—who provides this new hardcover book’s foreword—was unaware of it.

Elie Wiesel’s fight for memory earned him a Nobel Peace Prize; it’s well and proper his attic be explored, but this story might have needed the cobwebs cleaned off a little more thoroughly.

It must be dispensed with immediately: Wiesel is a hero. He was a thoughtful writer, an engaging activist, a brilliant professor, a messenger to mankind, but not really a poet.  Even The Tale of a Niggun, presented as poesy, is fundamentally one of Wiesel’s short stories effortfully broken into a ten minute read of free-verse stanzas.

The tale, and its lesson, however, are classically Wiesel. Human and beautiful, it empowers the powerless. It’s traditional for Jews to place stones on graves; and this story, based on several examples from history, places a pebble on an already insurmountable pile of rocks that can always use a little more weight.

Wiesel, holding a mirror to the real ruins of mid-century European history, tells a small story largely: Nazi authorities have demanded of a small Jewish community the sacrifice of ten of their own, to be hanged on the eve of Purim in remembrance of Haman’s ten sons strung up by their ancestors in the Book of Esther. As the community leader, the rabbi’s decision, from scripture, is clear, but he knows that the dogma does not rise to the horror of the stormy present:  refusal means disaster not for ten, but for all.

The Tale of a Niggun is, of course, a Jewish book, but also not a Jewish book. Jewish stories, even in the present tense, are ancient stories, and the question, and lesson, central to the book are as present now as they’ve been since Eve left Eden. The hindsight of 2020 makes it as difficult a question for the reader as the story’s protagonist; there is night around me, and within me, he knows. The hindsight of 2020 is also what makes the story affirmational and informational: there is night around us, and within us. A community besieged by its hostile civil authority is certainly familiar to the modern reader, and the monolithic Nazis, never mentioned by name, leave no doubt that there are not, no matter what anyone might claim, good people on both sides.

It would be a difficult—and perhaps impossibl—read for a person not at least moderately familiar with the Jewish religion and in particular the Hasidic customs of eastern Europe, with a glossary for guidance but little for context within the book- your uncle’s tractor salesman in Oklahoma could make it all the way through The Tale of a Niggun, for instance, without ever learning what a niggun is. There is no stained glass to explain the stories to the churchgoing illiterati; frequent Wiesel illustrator Mark Podwal’s watercolor paintings are lovely but act not so much as illustration but as punctuation.

Perspective, here, is everything: at an eye-popping 25 dollars for what is, in essence, a very brief reading experience, The Tale of a Niggun might not hold up well to its fee; viewed as a lesson, particularly for the Jewish home, however, one remembers that attics like Wiesel’s hold plenty, and plenty of, family heirlooms from generation to generation.