The Taking of Jemima Boone: The True Story of the Kidnap and Rescue that Shaped America 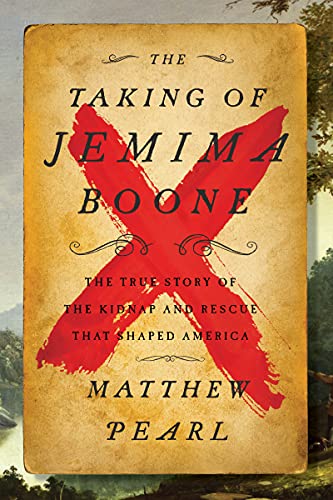 “a story of the famous Daniel Boone that stands on just its facts, and yet the storytelling has the same quality that has made Pearl’s historical fiction so popular.”

Matthew Pearl earned notoriety for his historical fiction. Here, however, he finds a story of the famous Daniel Boone that stands on just its facts, and yet the storytelling has the same quality that has made Pearl’s historical fiction so popular.

This story has appeared many times, “transforming life into literature.” It inspired James Fenimore Cooper’s popular Last of the Mohicans (1826). Matthew Pearl also tells the less well known history of the retaliation by Indians and settlers following the rescue attempt.

The Taking of Jemima Boone, however, hits on greater topics from the beginning, such as the irresponsibility of men on the frontier forcing women to fill in the gaps for the survival of families. Daniel Boone himself was “away for the better part of two years” on one of his many trips.

Race has a place in the story. “The vast wilderness in which these events occurred put escaped “enslaved people in special danger” but “also provided special cover” and sanctuary. A minority of the white settlers originally wanted enslavement kept out of Kentucky and families including the Boones owned no one. Even enslaved, African Americans played major roles in settling Kentucky.

The story centers on the Kentucky settlement of Boonesboro, built illegally on Indian lands, its settlers “outlaws to the neighboring British colonial authorities.” Suddenly, the beginning of the American Revolution transformed these peoples into “setters and nation builders,” the pioneers of a new country.

Daniel Boone had learned of Kentucky during the previous war with the French and Indians. He became obsessed with “the land of tomorrow,” as some sources claimed the name meant. His wife Rebecca and daughter Jemima believed themselves to be the first female settlers “on the shore of the Kentucky” River. As the Indians had warned, the settlement at Boonesboro frightened off the game animals.

Boonesboro, only one year old and under threat of attack by bands of Indians, had just one canoe. On July 14, 1776, Jemima, the 14-year-old daughter of Daniel Boone, and sisters Betsy and Fannie Callaway set out in that craft. Their harrowing adventure began.

The young women became captives of one of the renegade bands of Shawnee, this one led by the Cherokee Hanging Maw. Bands of Indians had become increasingly mixed with regards to tribes in response to the white settlers “who found any excuse to slaughter [any] American Indians [indiscriminately] and grab more land.”

The native tribes of Kentucky would not give up their lands as the area’s resources in furs proved almost their only marketable resource. “Without their hunting ground” and the furs to pay for guns, their families would starve.

Hanging Maw and Jemima had previously met during the land negotiations at Sycamore Shoals when he had visited the Boones’ cabin. During the previous war, he had served with Daniel Boone and George Washington.

“The Revolutionary War increased pressure on tribal factions to commit to alliances or become enemies of one side or another,” even among themselves. The three young women, whom Hanging Maw mistakenly believed were all Boone’s daughters, could become bargaining chips in his efforts to obstruct American efforts to seize more native lands.

The Taking of Jemima Boone then becomes a saga of frontier pursuit. Jemima and her friends feared for their lives not only from their captors, but “the cries and howls of dangerous animals filled the air” and discouraged escape.

“Years of atrocities” against the Shawnee worked against the captives “putting them in imminent danger” although Hanging Maw seemed to have had great affection for Jemima. The captives also faced the danger of becoming permanent members of the Shawnee tribe, even by their own choice. “Escape could accelerate death.”

Captain Mathew Arbuckle at Fort Randolph learned of the captures and set out to rescue the young women. Jemima and her friends could only hope for rescue, however, by her father, the legendary indefatigable tracker Daniel Boone; but “they needed a way to conspire with him from afar.”

Pursuit parties at Boonesboro organized shortly after the young women were taken, including the recovery of the one canoe. “One misstep and they all could be wiped out in an ambush,” but they also risked the lives of the captives if they were detected too soon.

The party led by Boone stood the only chance of rescuing the captives. Boone’s son, however, had lost his life in a similar situation a few years earlier, and then Daniel Boone would later nearly suffer capture or death visiting that son’s grave.

“The exodus following the girls’ kidnapping issued in a distinct period of dire straits” for the new settlements in Kentucky. Jemima’s kidnapping had also threatened the peace among the Indians that Chief Cornstalks attempted to engineer at that time and that cost him his life.

Indians retaliated against Boonesboro for the attempt to rescue the young women, “skirmishes and raids now multiplied.” The British in Detroit prepared to arm the Indians to at least win the American Revolution in the West.

For Daniel Boone, the consequences of rescuing his daughter included being wounded, captured, and tortured. A greatly weakened Boonesboro would nearly fall to a siege by British soldiers and Indians but it, like the new United States, would find a way to survive.

These pages have interesting details such as the difference between a hunting path and a war path, the importance of buffalo to the Shawnee, the interior of a cabin in Boonesboro, illegitimacy in family relationships, and the art of tracking. The Taking of Jemima Boone has annotation.