Taking Back the Constitution: Activist Judges and the Next Age of American Law 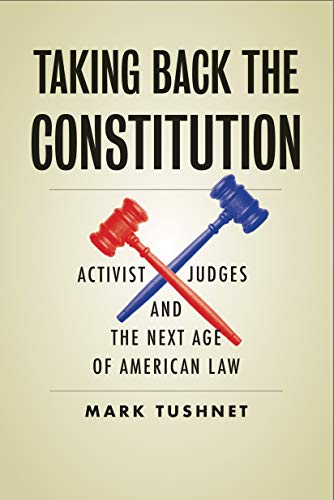 Prestigious constitutional law professors can publish whatever they please, ranging from a critical analysis of the Supreme Court cases to outlandish predictions about the Constitution. Mark Tushnet does both in Taking Back the Constitution. A populist by heart and a critical legal studies scholar by reputation, Tushnet has not been afraid to release ideas that would have more traction in a people’s republic than in a tempestuous democracy, such as the U.S., which tumbles through the ups and downs of normative fistfights.

The book’s core idea is a permanent feature of the Tushnet scholarship: Judicial supremacy does more harm than good.

Judicial supremacy is a code phrase to illustrate the powers of Supreme Court Justices to modulate legal norms. In the U.S., more than anywhere else, the Supreme Court has been at the forefront in shaping the legal landscape. The Court discovers new values buried in the constitutional text, it overrules precedents, it limits state rights, and it declares democratically processed legislation to be unconstitutional.

For Tushnet, judicial supremacy is politics disguised as law. The critical legal studies, an academic philosophy to which Tushnet subscribes, argues that judges decide cases according to ideological preferences. Still, they rationalize their opinions as if the “law” dictates judicial outcomes. Progressive judges see the same Constitution in ways opposite to how conservative judges do. In politically charged cases related to abortion, guns, immigration, commercial speech, and civil rights, the Supreme Court splits into predictable ideological factions.

The political combat over selecting new federal judges is indeed fighting over controlling the future course of law. It is no secret that Republican presidents fill vacancies with conservative judges and Democratic presidents with liberal judges. Tushnet makes a valid observation that the Justices continue to implement “their” president’s ideology for decades, long after the president who selected them has left office or died. Thus, the Supreme Court may be conservative while the politics have turned progressive, and vice versa.

In analyzing law as ideology, Tushnet describes the constitutional history of the past 90 years (1930s–2020) in binary terms: progressive versus conservative. Per Tushnet, politico-legal ideologies emerge, grow, and decay, almost in a replacement pattern but without any archetypical Hegelian synthesis.

In the first phase (1930s–1960s), says Tushnet, a progressive constitutional ideology launched an administrative state protecting consumer rights and social safety nets, such as Social Security. The second phase began in the 1980s, under President Reagan, when a conservative constitutional ideology arose, focusing on tax cuts and the weakening of the administrative state. The U.S. is still amid the “Reagan revolution.”

Continuing with “either this or that” binarism, surmises Tushnet, “The United States is going someplace new.” Either President Trump, if he wins a second term and appoints more judges, will bring about an ultra-conservative ideology, or a progressive alternative, whose contours are “yet unclear,” will replace conservatism. Tushnet hopes that history would repeat itself, and “the new progressive alternative” will be of the New Deal/Great Society vintage.

Simplification is a useful skill in books that target the general audience. Taking Back the Constitution is instructive reading for students hoping to become political scientists, sociologists, historians, journalists, and lawyers. The book might help students studying the rise and deconstruction of the administrative state. Tushnet does not simplify at the cost of superficiality, though it so seems. He examines hundreds of cases, occasionally in detail, always in simple conversational language, free of legal jargon. The book is utterly transparent, even though (or that’s why) it might prompt intense disagreement.

To readers poised to disagree, Tushnet’s simplification of history, party ideologies, constitutional interpretive models, and the “either-or” alternatives for the future course of law will do little but chafe them. The unfolding of history is rarely linear, Hegelian, Marxist, or any other model. It is fluid and uncertain. Tushnet is on firmer ground when he claims to be a “cynic” rather than an astrologer.

A normative contest between progressives and conservatives is undoubtedly a battlefield in fluid constitutionalism. Many other battlefields shape the course of law. The reality, any reality, except for brief periods, is mostly in a fuzzy transition from various outlets of departure to multiple points of arrival. The U.S. constitutional history has been no exception to blurred reality.

Some readers might find it even more unsettling than “either-or-ism” when Tushnet at the end of the book proposes “popular constitutionalism” as a replacement for judicial supremacy. Theoretically, popular constitutionalism means that the legislature and the executive should be equal partners with the judiciary in interpreting the Constitution. It also implies anti-elitism in that the judges are the unelected elite, while the president and lawmakers are the people’s people.

Popular constitutionalism is a non-starter, Tushnet should know unless he is playing Socrates with the readers. It is unlikely that progressives or conservatives would accept popular constitutionalism. For progressives, judicial supremacy is a check on popular legislation when the masses and their elected officials ride on waves of intense prejudice to pass laws or executive orders against vulnerable minorities, such as the Japanese Americans in World War II or Muslim Americans under Trump. For conservatives, judicial supremacy is a check on legislation when Congress and the president pass laws to redistribute wealth, limit the free speech of businesses, or curb religious freedom.

Progressives and conservatives are fine with judicial supremacy if they have a majority in the Court.

When examined in the context of global legal traditions, the common-law judges, for the most part, have done well in developing desirable legal norms. Separate but equal was a disgraceful judicial invention, though, there was one dissenting Justice, ironically, a former slave-owner; eventually, the Supreme Court corrected itself. Value conflicts among judges may produce arbitrary outcomes. But that is the cost of choosing a vibrant jurisprudence.

The imposition of “stable” values, often the preference of self-righteous ideologies, is a dangerous option that Tushnet should oppose vociferously. High courts that decide cases following the will of the politburo have no resort to judicial supremacy, but what good is their jurisprudence. The will of the people as the basis of constitutionalism, though a beautiful mantra, is no less hazardous when an enlightened nation such as Germany goes berserk.

If a judicially mediated constitution is an unavoidable model, the conservatives must pay the price in terms of accepting progressive rulings, and the progressives must accept conservative rulings. They already do, though resentfully. There are mild protests but seldom any riots against the Supreme Court decisions. The refrain that the people should take back the Constitution from activist judges is an invitation to subversion.