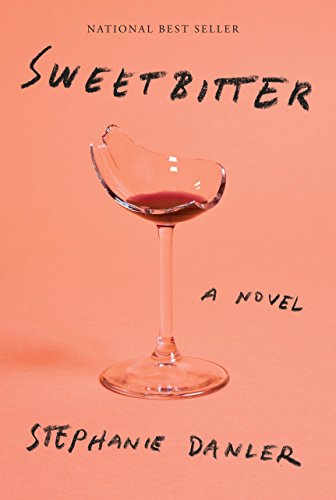 Our narrator, Tess, is coming of age. She has left a childhood we’ll never really see in a town she’ll rarely speak of, has crossed a bridge, has arrived in New York City. She’s taken a job at a swanky restaurant housed within an “aesthetically unremarkable, even ugly in places” place. She’s being inducted and indoctrinated into the world of waiting. Wine and oyster tastings. Backwaiters and front of house. Bar mops and cocaine. Innuendo and desire. Blackouts and sex of the desired and undesirable kind. The co-conspiratorial fellow staffers who feel like family, maybe, except for the fact that Tess hardly understands who they are.

She’s trying to learn this whole confounding world—the oddities of the clientele, the mercurial temper of the chef, the bitters, sours, sweets, and salties, the relationship, in particular, of an older, alluring server, Simone, and the younger bartender, Jake, who, rumor has it, has slept with everybody, but whose greatest loyalty (or so it seems) is for this older, smart, essential, distant, necessary Simone.

What is it, Tess wonders (but doesn’t wonder hard enough), that goes on between Simone and Jake?

A novel composed of four seasons and countless gorgeously described tastes, Stephanie Danler’s much-heralded and (so the press goes) semi-autobiographical debut, Sweetbitter, is ultimately about immersion.

Tess goes deep into this darkened world. She allows herself to be adopted into its strangeness, to receive its attentions, to be used and abused by it. She swallows the pills that are offered (this one peach and this one blue) as well as the oysters, snorts the cocaine, sickens herself with alcohol, and learns: how to uncork a wine bottle, stack the plates, clean the filth, organize the wine room, and receive the men and women who lust after her youth and beauty.

For readers, the beauty lies in the lines themselves: the consistently gorgeous renderings of the place, its people, its dishes. Here, for example, is Tess remarking on Simone:

“I saw sprays of silver in her coarse hair. I saw inscriptions of her years around her mouth, a solid crease between her brows from a lifetime of cynicism. The posture of a woman who had stood in a casual spotlight in every room she’d ever been in, not for gloss or perfection, for self-possession. Everything she touched she added an apostrophe to.”

Here she is on taste:

“Taste, Chef said, is all about balance. The sour, the salty, the sweet, the bitter. Now your tongue is coded. A certain connoisseurship of taste, a mark of how you deal with the world, is the ability to relish the bitter, to crave it even, the way you do the sweet.”

And while the great majority of this novel takes place inside the restaurant, Danler is, I think, best on New York City itself. I leave you with this:

“Then one day I learned that there was an invisible ravine running up the city, as deep as the Grand Canyon, narrower at the top. You could walk in tandem with a stranger on the sidewalk and not realize that he or she is not on the same cliff-side as you.

A bracing new voice. A talented lyricist. A story that may or may not give you pause before you reserve a table at your own favorite version of swanky.