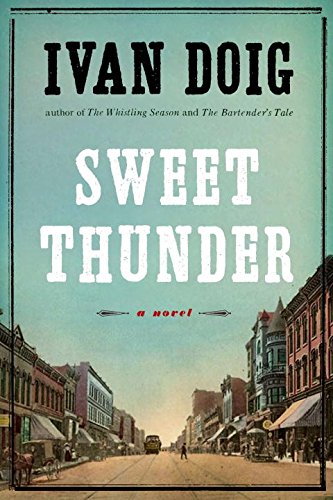 There have been many charming rogues through literary history, and Mr. Doig brings us another one: Morrie Morgan (nee Llewellyn), a gentleman opportunist and trouble magnet. He’s been a rambler and a gambler, a boxer and a teacher among other disparate occupations. Now in Sweet Thunder he finds his ideal employment as an editorial writer for an upstart newspaper, the Thunder.

Readers already in love with Morrie from previous books in the series will have no trouble jumping into his new escapades with him. New readers may be more hesitant, since he starts off by lying to his brand-new wife long before we know he has reason to.

Once she catches on to his checkered past and the fact he married her under a false name she dubs him “a chameleon on a barber pole” and packs her bags.

This gives Morrie two problems. The first is professional: As a silver-tongued editorialist he’s charged with battling the huge Anaconda Mining Company in a long-standing dispute with the miners’ union that will seal the fate of his beloved Butte, Montana. This war is conducted through competing newspapers against an editorialist of equal mastery.

The second problem is personal: After gallivanting about recklessly for all his life, accumulating troubles that chase him from state to state (“a gazetteer of risky occurrences”), and never having a satisfying and enduring love affair, he must win back his wife by facing up to the responsibilities of employment, property, and relationships for the first time.

While the book isn’t truly “madcap” or “screwball” it has an undertone of these, which makes it hard to take Morrie seriously until late in the story. The two-pronged plot problem settles down to: Can a chameleon change his stripes? and Can the David of Butte take down the giant of Anaconda by slinging words instead of stones?

Things keep going wrong so fast that readers have good reason to doubt.

Morrie is assisted in escaping his misadventures by friends who are delightful while being cliché. Readers who like their characters to be caricatures will love this cast. Mr. Doig has a gift of making oddballs believable and lovable, as well as a gift for capturing place and personality in deft strokes.

Unfortunately, he has trouble with run-on sentences in dialogue. Lines like “‘That trunk of yours got sidetracked somewhere between Frisco and here, I’d say,’ he cheerfully proffered the claim check” keep wrinkling the otherwise silken fabric of the narrative.

These will stick in the craw of grammarians, but if they can overlook the style, they will find enough clever observations, interesting situations, and thought-provoking themes to satisfy diverse tastes.

So if you forgive Morrie his foibles and have a tolerance for the absurd then Sweet Thunder will deliver an entertaining story at a high intellectual level. It will also take you to 1920s Montana when big forces were “dancing as one in a Rocky Mountain outpost where copper and blood mingled, all in the dance called America.”