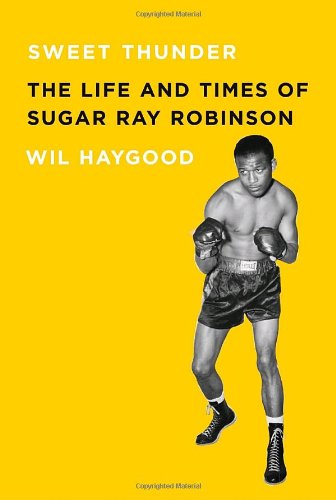 “Maybe he realized . . . the utter aloneness of the fighter—despite the hangers-on, the crowds, the adulation, it was a pitiless profession.”
“It was a savage sport, but it held a kind of sacredness to him—a mystery.”

Few biographies of great athletes manage to conquer the legend, to place the athlete in context as a walking, talking, human being. It may be because they tend to be either fawning— relying on “good stories” without regard to their accuracy—or they’re overly bloodless and academic. (None of the biographies of Michael Jordan, for example, have seemed to capture the man behind the uniform.) There have been some exceptions: Namath: A Biography by Mark Kriegal was fascinating and brutally honest and factual; as was Sandy Koufax: A Lefty’s Legacy by Jane Leavy; and Joe DiMaggio: The Hero’s Life by Ben Cramer. But these remain the exceptions that prove the rule.

Now add to the exceptions list Wil Haygood’s biography, Sweet Thunder: The Life and Times of Sugar Ray Robinson. Haygood—who earlier wrote a biography of Sammy Davis, Jr.—manages to capture the personality of the man in addition to the accomplishments of the athlete. Robinson was, no doubt, one of the handful of best boxers who has ever lived, yet he was notoriously envious of the skills of other public figures and entertainers—most notably musicians. (“He wanted desperately to know about life on the road for musicians.”) Haygood uses this angle to produce some excellent comparisons between Robinson and jazz players such as trumpeter Miles Davis. But the analogy only goes so far, as musicians’ errors are masked by other musicians. The boxer enters the ring alone and stands or falls on his own.

Haygood fully acknowledges the fact that Robinson—a kind man on his own—could be vicious in the boxing ring. After killing Jimmy Doyle of Los Angeles in a fight, Robinson was asked at the inquest if he knew or suspected that Doyle was in trouble. His response was that, as a professional fighter, it was his job to get men “into trouble.”
This period piece is also a glorious overview of post-World War II Harlem, a time when jazz was at its peak and the issue of civil rights was about to break. The general acceptance of black public figures like Robinson (the third African-American/Negro to have his face on the cover of TIME magazine) made them pioneers in the then-burgeoning movement. But the author does not take things too far in this direction, as this is not a sociology or history textbook. Nor does he bore us with literal blow-by-blow accounts of every single amateur and professional fight that Sugar Ray Robinson fought. No, instead he tells us just enough to understand and recognize the greatness of this late athlete’s (1921–1989) life within and outside the world of sports.

This, then, is the well-told story of a man blessed with great skills. “I had it tonight; yes, sir, I had it tonight when I needed it—thank God.” This is the tale of the man who did so much to advance The Sweet Science, which is perhaps why he was the first of three highly gifted boxers (Sugar Ray Robinson, Sugar Ray Leonard, Sugar Shane Mosley) to be known as Sugar. A New York Times reporter once wrote of Robinson, “He’s too incredible, too colossal to be true.”
Haygood captures both the man and the legend. This is a factual biography of a very unique man. At its conclusion, the reader feels as if he’s met Sugar Ray and comes to miss his presence.