Sweet Lamb of Heaven: A Novel 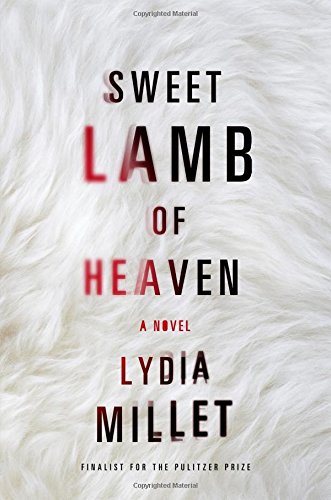 Anna, married to Ned, a charismatic workaholic who is never home, gets pregnant and Ned demands she abort it, but she refuses. Ned does not support her decision, does not help during pregnancy, or attend the delivery. He also does not bother with the baby Anna names Lena.

A weird phenomenon hits Anna at Lena's birth: She hears voices and only when Lena is with her. She worries she is schizophrenic and researches the illness. Anna does not disclose these episodes to anyone.

With Lena's first words the voice stops, yet Anna keeps her journal of the messages of different dialects and languages spoken, and she does she stop researching this occurrence.

Anna writes her take on this as the following: "Strange things exist, astonishing oddities—transparent butterflies, three-foot-wide parasites that look like orange flowers, babies born pregnant with their own twins . . . I want to know whether the unknowns in nature are only unexplained phenomena or whether there are genuine anomalies-whether a true anomaly exists. I doubt that it's possible for an event to occur only once, to one person, and as I look and look for an answer the more it seems to me that what are called anomalies aren't unique buy only symptoms of gaps in understanding." She backs her research with anecdotes taken from different sources, such as Wikipedia, the Bible, and the dictionary.

For several years, Anna experiences a sheltered life in Anchorage while Ned pursues other women and a public persona. Finally, when Lena is four, Anna takes Lena and a few meager belongings and leaves.

They travel relying on funds Anna withdrew; not nearly half of what she contributed to the marriage, thanks to her parents' generosity which she feels is why Ned chose her. He was poor, raised by a drunk with nothing, so Anna thinks he saw a way to climb out of poverty through her family.

Anna settles in the Wind and Pines, a shoddy motel in coastal Maine where she hopes they can enjoy privacy and distance from Ned's control, though he does not care for her or their child. They befriend Don, the manager, and Lena blossoms in the secluded area. The few new residents all share a common bond: they are either hiding from something or are looking for solace and answers.

Anna soon becomes paranoid after learning Ned plans to run for office. She believes he will hunt her down to show he's a happily-wed family man, something he most definitely is not. She discusses her fears to the others, and they try to protect her, but Ned's claws reach many miles, and before she can flee, he locates her.

Ned offers Anna a proposition. She is to play the doting wife and come back home. He will portray the adoring husband and father until he gets elected. He promises her the divorce she requests once he's in office. Anna knows different. Ned is a sociopath, and nothing will deter him.

Anna tells her story as a first-person account, leaving nothing to the imagination. The horror and resentment she holds toward Ned are palpable as she works to save her child and herself from the clutches of a madman to whom people are only a means to get what he desires.

Ned's machinations are chilling, and though his outward persona may be charming, beneath his facade lies a snake ready to strike. In Anna's naïveté, she is initially drawn to him, honestly believing he loves her, yet his authentic side is quickly revealed. How can one fight against this force of iniquity? The story climaxes when Ned kidnaps Lena, forcing Anna into action. This proves to be a test of Anna's strength as well as a depiction of the powers of good against evil.

Millet's characters are authentic and well rounded, and the plot is entirely realistic. From the vivid portrayal of Alaska to the icy cliffs of the Maine seacoast, Sweet Lamb of Heaven is a psychological thriller offering a spine-tingling read.