Sweeney on the Rocks 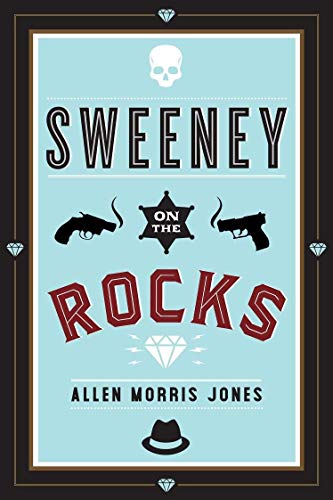 “Sweeney on the Rocks is one of the best crime books out this year. Here's hoping for a movie, or better yet, a mini-series.”

This gem of a book seems to have fallen under the radar even though some of the best books being published today are coming out of small publishing houses. Is it because the biggies are afraid to take a risk on a lesser known author? If so, they are missing out on some excellent writing.

Meet 37-year-old Ted Sweeney, sole proprietor of a down-at-the-heels handyman business called Anything for Money. He drives a weak-springed 1961 International with the tailgate hung on with baling wire, lives in a bunkhouse he doesn’t own on a working ranch he doesn't own with a mishmash mongrel (Australian shepherd/beagle/blue heeler) that he does own. With a ring in his pocket, he's about to ask his librarian girlfriend Aggy to marry him.

His living room is filled with yard sale furniture, and accoutrements along the line of bucking bronco lamps topped by dusty weather-beaten leather shades. Faded Charles Russell prints adorn the walls. Sweeney's favorite chair, an old recliner, has seen better days, and on this day he arrives home to find it cradling the behind of a dead guy with a fedora tilted over his eyes.

"The guy's head lolls, rocking slightly. Cheeks pale and waxen, dead eyes staring out toward a questionable eternity. Under the man's chin, hinge to hinge, see the wink of white bone, a cartilaginous mouth in the esophagus, gaping . . . "

Does Sweeney yell out in shock? Does he panic? Does he grab the phone and call the police to breathlessly report what he's come upon? No. He does none of those things. The last thing he wants to do is call the police because Sweeney, otherwise known as former Brooklyn badass mobster Cosimo Aniello, is hiding out in the back-of-beyond piece of crap town called Rockjaw, Montana, as part of the federal Witness Protection Program.

And as a former wise guy himself—it takes one to know one—he realizes the corpse is someone from his old life, a gangster, a thug. Which tells Sweeney one thing right off. The mob he squealed on has tracked him down.

But what is this? A warning? A setup of some kind? Sweeney doesn't know for sure, but there's only one thing a guy like him can do. He wraps the guy up and dumps him in the Yellowstone River.

"The body sags into a U, and he catches it with his knee, quick-steps it toward the edge of the bridge. Lets it rest briefly on the railing—'Father, son, holy ghost.’—and rolls it over into the river."

Sweeney's angry ex-wife who came into the WITSEC program with him but has since divorced him and become a local deputy, received an envelope containing photos of what Sweeney just removed from his living room. The dead guy sitting in the saggy recliner:

". . . A grey-toned digital snapshot of the body. His body. The dead wop. Whoever had the camera, they were sitting on Sweeney's sofa. Where Sweeney had sat not a dozen hours ago, smoking a cigarette."

Before the two of them can figure out what to do about this new development, Cheryl shows up. One of Sweeney's old girlfriends, his sidepiece:

"Ninety pounds of cheerful, over-exuberant meth addition . . . daughter of a stripper and an absentee father . . . twitching like one of those windup toy penguins that dance across your desk. The complexion and lips of a porcelain figurine but the teeth of a Kentucky tobacco chewer . . ."

Cheryl is now married to Sweeney's mobster cousin, Eddie. She and Eddie have fallen on hard times but have come up with a new scam. They need Sweeney's help to pull it off and promise to cut him in. Sweeney has a dilemma.

Author Allen Morris Jones is quick with a quip, and absolutely nails the mob talk that readers are familiar with from the movies. Some may find the truncated incomplete sentences require a bit of re-reading once in a while, but it all works and is so entertaining, it doesn’t interrupt the story in the least.

As for Sweeney, what's not to like? The former mobster has a soft spot for dogs, friends, and old folks, and he tries to help wayward kids. He feels really bad about dumping that guy in the river. Almost penniless he's living the straight and narrow. And even though he knows all the wise guy tricks, he doesn't practice them.

Well, not much anyway.

Sweeney on the Rocks is one of the best crime books out this year. Here's hoping for a movie, or better yet, a mini-series. Oh, and more books like this from Allen Morris Jones.