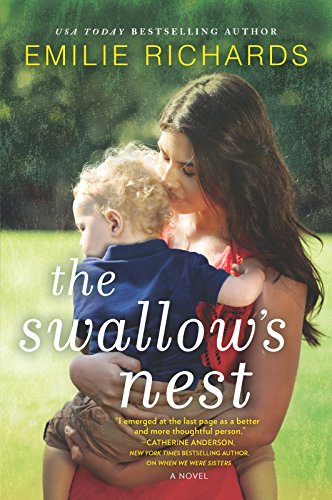 What constitutes being a mother? Is it giving birth to a child or loving and caring for one who isn't born to you? This is the premise for Emilie Richards' latest release, The Swallow's Nest.

Lilia Swallow couldn't be happier; she loves her handsome husband Graham, the California home she inherited, and her career. For the past year, she has been diligently watching over Graham throughout chemotherapy sessions after being diagnosed with lymphoma. Though her own business as a home design blogger is her passion, Graham now is her primary concern.

After the long and tedious treatment, Graham is in remission, so Lilia holds a party to celebrate the good news. Their friends and Graham's colleagues gather to wish him continued recovery. Then an uninvited guest arrives, thrusting a three-month-old infant into Lilia's hands declaring he is Graham's son. She is leaving him to Graham for he did not keep his promise to support both of them. Lilia believes this is a mistake until she sees the guilty look on her husband's face. They had talked about children, but with Graham's uncertain illness Lilia thought they should wait. It looks he got what he wanted, just not with her.

The baby's mother, Marina comments upon handing over the child with Lilia: "You'll have lots of time to think about this moment and what a horrible person I am. But while you're at it, don't forget I gave this baby life. Think about that, Lilia, when you're feeling superior. I did something you couldn't be bothered to do. And think about what it was like for me to manage everything on my own up to this point when I was promised so much more."

Intensely shocked, angered, and hurt, Lilia flees home to the comforting arms of her family in Hawaii. She misses Graham, realizing she cannot be angry at baby Toby, so she decides to go back and be a mother to this child. Tensions are high between Graham and her though he is very repentant. Graham explains he worried he wouldn't survive and because she wouldn't get pregnant, he needed to have a part of him remain.

Soon Lilia and Toby form a deep bond, and she couldn't love him more if he were her own. At almost a year since Toby's arrival, Carrick Donnelly, Graham's best friend, and attorney suggest they petition for adoption. During that time Marina makes no attempt to connect with her baby.

Then Graham's conniving mother with whom he's been estranged for years devises a plot for Marina to legally regain the boy. A custody battle commences.

Deeply emotional, three women are vying for a child's life. Who will the courts decide is the best mother for him? This novel offers genuine compassion, forgiveness, and selflessness as the real meaning of motherhood.