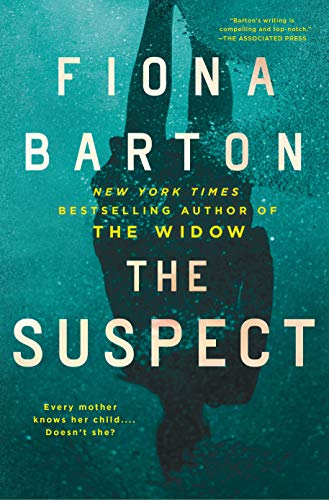 “Fiona Barton’s The Suspect may falter at times as a thriller yet it steadily succeeds as a story about mothers, how fierce their love can be when their children’s lives are in jeopardy and how it surpasses right or wrong, even in death.”

What does a seasoned journalist do when she finds out two teenage girls are missing in Thailand, coincidentally the very same country her own son has traveled to two years prior and basically fell off the radar? If you’re Kate Waters, you hop on a plane and investigate, along with a gaggle of equally intrusive reporters.

Fiona Barton, bestselling author of The Widow and The Child, examines the naivety of the teenage mindset for exotic adventure pitted against the backdrop of the reality which is the seedy city of Bangkok where the kind of lowlife individuals practically crawl out from the grimy crevices of the hostel the girls end up staying at.

The two missing girls, Alex and Rosie, never make it out of Bangkok. They are killed in a fire on the property. A bar is also on the premises. The owner, a brusque woman in garish makeup, simply known as “Mama” also dabbles in a little drug dealing on the side, making the most out of exploiting her young customers, taking them for all they’ve got.

The bar and hostel serve as the primary locations for the majority of the story. The restricted setting may become claustrophobic to readers and seems like a missed scenic opportunity. Some readers might be interested in finding out more about the city of Bangkok, its trappings and treasures, and the beautiful landscape of Thailand at large.

As characters, Alex and Rosie are starkly different, which at times reads like a contrivance. Alex is the good one who wants to travel the rest of the country and see the sights, and Rosie is the bad one who just wants to party, hang out with boys, and get tattoos. There is little room in Barton’s world she’s created, as in real life, for shades of gray.

The narrative is told through a flurry of brief chapters, told in various perspectives from one of the mothers of the missing girls, to the British inspector on the case, Kate the reporter, and Alex leading up to her death. And while this style should help to accelerate the pacing, it oftentimes slows down due to Barton’s incessant need to detail each character’s every move. Certain scenes go relatively nowhere such as Kate waiting in an airport lounge and the mention of one of the characters in a staff room eating a “flabby lasagna.”

The most complex relationship in the book is the one established between Kate and her troubled son Jake who becomes a suspect after the two girls are murdered. Kate laments, “I’ve always been so good at interviewing people, hearing the stutter of truth beneath polished lies. But not this time.”

Her inability to recognize her eldest son’s acts of deception is a maternal conflict many mothers must grapple with in their own lives. It clouds Kate’s judgment and her journalistic integrity is tested on more than one occasion because of it. These moments prove to be some of the most complicated and deeply interesting passages in the narrative.

Lesley and Jenny, the grieving mothers of the two murdered teens, are sympathetic figures, adding emotional texture to the story. They are messy and unpredictable in their heartbreak. They say and do things they shouldn’t, then half-heartedly apologize later for them. While they, too, come from different backgrounds they remain united in their resilience to seek justice for their slain daughters. Together they are a force to be reckoned with.

Readers may grow frustrated with how long it takes the author to finally reveal why the girls are killed. The tell-tale clues and descriptions of certain characters along the way make things a little too easy to figure out. Fiona Barton’s The Suspect may falter at times as a thriller yet it steadily succeeds as a story about mothers, how fierce their love can be when their children’s lives are in jeopardy and how it surpasses right or wrong, even in death.