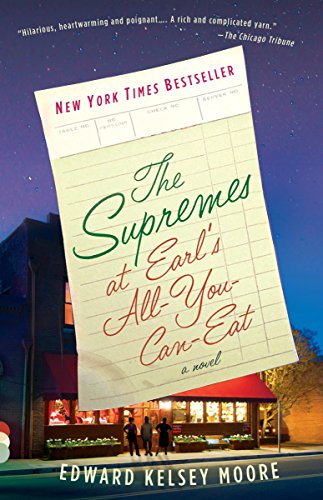 “. . . deserves to be read in its enchanting entirety before the inevitable movie deal comes to pass.”

A clutch of husbands, wayward and otherwise, a vicious small-town bigot, and even a couple of benign ghosts—including a most unladylike Eleanor Roosevelt—are among the characters inhabiting the pages of professional cellist Edward Kelsey Moore’s enchanting debut novel.

But it’s Odette, Clarice, and Barbara Jean—nicknamed The Supremes by their friends and watched over by avuncular diner owner Big Earl—who bear testament not only to the author’s literary skill but also to his own supreme listening skills.

As a child, he eavesdropped on female relatives as they talked at family gatherings, and it paid off, enabling Mr. Moore to breathe life and warmth into his three very different, though equally memorable, main characters.

As he explains: “Even when I was too young to fully understand the often very adult subject matter of their conversations, I was struck by how quickly the topics veered from heartbreakingly tragic to wildly hilarious. I was also amazed that the aunts and cousins who had the hardest and saddest lives were always the funniest people at the table.”

The Supremes of the title comprise the seemingly fearless Odette, who chats regularly with the ghosts of her mama and her specter sidekick, the hard-drinking Eleanor Roosevelt (“. . . the perfect little lady when she was in the White House—all lace doilies and finger bowls—but since she died . . . drunk as a skunk”) with as much equanimity as she does with her friends.

Then there’s Clarice Jordan Baker, whose original claim to fame is that she was the first black child born at University Hospital, in Plainview, Indiana, a fact her mother made sure everyone knew. Her birth, rhapsodized one newspaper article, heralded the arrival of “the new Negro family of the desegregated 1950s.” A talented classical pianist, Clarice has for years suppressed her own needs for those of her Ken-doll handsome, feckless husband Richmond. When her dam of frustration finally bursts, Richmond is almost swept away in the flood.

Barbara Jean’s start in life is far less salubrious. Born to a drunk on a stranger’s couch, it’s only when Odette and Clarice take her—somewhat grudgingly at first—under their collective teenage protection that she’s free to reach for her true potential. Loved to distraction by her wealthy older husband Lester, she’s nonetheless fragile, damaged by the sociopolitical times of her youth as well as a personal tragedy almost too huge to bear.

The tumultuous story of the women’s enduring friendship, much of it played out at their regular table at Earl’s All-You-Can-Eat diner—the first black-owned business in Plainview, Indiana—spans some 40 years, from the time the civil rights movement starts to take hold.

This is a book that deserves to be read in its enchanting entirety before the inevitable movie deal comes to pass.