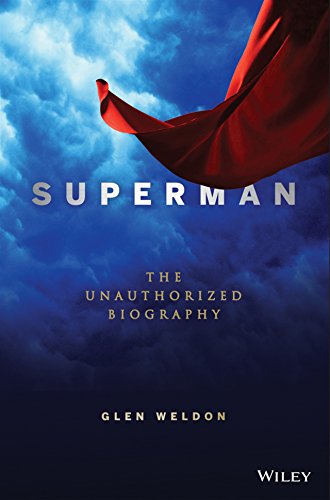 “Superman: The Unauthorized Biography . . . is a great tale of how myths are born and how those myths become integrated into the society they reflect.”

The image that has built up around Superman is so well known and has become so iconic that The Man of Steel may be the most famous fictional creation of the 20th century. Yes, a few others come close: Harry Potter and Mickey Mouse come to mind. But no other character has been able to cross so many boundaries, both geographical and political, the way Superman has.

With a sly wit and an obvious love for the subject he is writing about, author and NPR host Glen Weldon has gathered the sprawling, complex, and occasionally contradictory history of Superman into a rich and deeply textured story.

Inside this new biography Mr. Weldon incorporates not only Superman’s origin and life inside the comic pages, but his journey to radio, the silver screen, television, the Broadway stage, and across many different media.

Along the way he writes in detail about the stories of Lois Lane, Jimmy Olsen, various versions of Kryptonite, Supergirl, the bottle city of Kandor, Lex Luthor, and many others who cross paths with the Man of Steel.

As Mr. Weldon reminds us, especially in the early chapters of the story, the Big Blue Boy Scout wasn’t always a spokesperson for truth, justice, and the American way. That responsibility evolved with the combination of radio and the Second World War.

The early Superman as created by writer Jerry Siegel and artist Joe Shuster was a relative punk who made smart aleck remarks as he cornered and confined blackmailers, cheap thugs, vicious landlords, and others who were trying to rip off simple and kind people.

Initially Big Blue (one of many nicknames given Superman over the years) could only jump over buildings; his other powers were severely limited as well—especially when compared to the Superman of the late fifties and sixties who could extinguish suns with his super-breath.

Mr. Weldon directly addresses the duality and occasional contradictions inherent inside the legend and mythology that grew up around Superman—the least of which is the fact that he is two very two separate persons: reporter Clark Kent and Kal-El, the last son of planet Krypton.

Another aspect of that duality is the way Mr. Weldon tells the story of Superman’s growth as an “intellectual property” worth millions upon millions of dollars. The character grew to represent the best of America. But behind the scenes he can also be seen as a symbol of corporate greed, exploitation, and the manipulation of those who are much smaller than the corporation.

As management and editors take over the original vision of Siegel and Schuster, they move Superman away from his exciting origins and turn him into a nearly bland patriotic ideal, a figure that can also grace lunch boxes, sheets, and peanut butter while bringing in the big bucks from merchandising and licenses. As the corporation makes money hand over fist they fight the two men who brought them the property tooth and nail for every penny they can.

While he doesn’t shy away from that controversy of who exactly who owns Superman, Mr. Weldon doesn’t let this become the center of his work. Superman never leaves the stage, and above all, Superman is a comic character. Quality art and imaginative writing will always drive his real story.

Mr. Weldon’s respect for the work created by those who drew and wrote Superman over the years is one of the highlights of this work. He brings the reader into the artistic styles of Joe Shuster, Wayne Boring, Alex Ross, and many others while providing an honest assessment of each artist’s skill. Each incarnation of Superman’s existence—from the early smart aleck to the mullet-headed version he became decades later—is part of the much bigger story.

The book also provides insight into what it takes to bring a Superman movie to radio, TV, and the big screen. Most of us would never think about importance of Bud Collyer’s radio performance as Superman. But as Mr. Weldon makes clear, the actor’s skill and understanding of what he was doing cannot be ignored, for radio is how many adults began to perceive the comic character their kids were raving about in the schoolyard, leading to his acceptance as a popular icon.

The stories behind the creation of the Superman movies are as amazing and as funny as anything a comic writer ever dreamed up. Many of the tales could easily be at home on the Bizzaro planet.

Producer Jon Peters demands that Superman lose his iconic costume and also not fly in his movie. There is also his manifesto that there should be a battle with a spider. Why? As he quotes Peters “Spiders are the fiercest killers in the insect kingdom.”

As great as the occasional absurdities found inside the comic book life of Superman can be, nothing can equal Hollywood!

Superman: The Unauthorized Biography is the ideal book for both the detail obsessed fan as well as someone who may only know The Man of Steel from his status as an America icon. Superman: The Unauthorized Biography is not just the story of Clark Kent and Kal-El. It is a great tale of how myths are born and how those myths become integrated into the society they reflect.