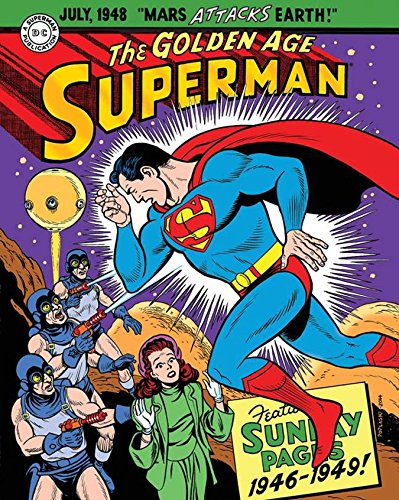 “Superman: The Golden Age Sundays 1946–1949 is the sound of America exhaling after facing nothing but stress for a long, long time.”

Cover dated June 1938: the first issue of Action Comics sold like wildfire. The minute that readers saw Superman raising that big green car over his head while that red cape flowed out dramatically from behind him, they went wild. Within a year he was everywhere.

Superman could defy gravity and his strength was beyond measure. In a time when so many were struggling in their day to day existence, his powers were pure escapist dreams.

He fought racketeers, criminals, corrupt politicians, and even domestic abuse in a time when so many felt utterly powerless. His success on radio and on screen contributed to his ever-widening myth and an expansion of his powers. As the Second World War became a reality Superman changed with the times. He became an icon.

Superman: The Golden Age Sundays 1946–1949 captures The Man of Tomorrow as he is again adapting to the times. These classic, full color newspaper pages haven’t been reprinted in such beautiful condition before.

This new collection holds 18 full length stories. Seen in their original dimensions they are pure Sunday morning bliss. There is also a cover gallery of representative comic books from the same period.

Eight years after that spectacular first appearance the Superman of 1946 can now visit space, travel in time, has X-ray vision and an array of superpowers that can boggle the mind. Those powers grew just as America needed more and more power to fight the threats overseas.

These stories were published during a time when America was winding down from war. The country and its people were exhausted. They wanted to forget their troubles; they needed to smile.

Superman stories always had a note of humor, but with the danger of total destruction passed, the character begins to lighten up even more. Domestic situations begin to take center stage. Lois needs her house cleaned, a neighbor asks Superman to babysit her son. Criminals trick Superman into performing a high wire act while they pickpocket the crowd.

But that doesn’t mean this isn’t prime Superman. Make no mistake about it, there is still a ton of adventure inside many of these stories. A dinosaur attacks Metropolis. Superman not only travels to the moon, he also goes back in time to deal with Cleopatra. In this collection’s most memorable storyline he finds himself on Mars!

Each page holds vintage, near-perfect Superman art. Original artist Joe Schuster had several assistants who worked closely with him. These pages highlight the rise of one an artist who helped define the way we perceive Superman.

As historian and writer Mark Waid points out in his introduction, Wayne Boring would go onto create the defining images of The Man of Steel as the forties moved into the fifties.

Like the hero, Boring’s work would become iconic in its own way. His Superman has a sense of authority, power. As you read these pages in order you can see familiar poses and motifs developing before you.

The fun in these storylines isn’t limited to the situations. Sharp readers and longtime fans may find a couple of notes of self-referential satire hanging below the surface.

One of these is a completely silly take on the way that Superman has become so heavily merchandised. In the real world the hero has morphed into a virtual icon of advertising.

As this story moves across a couple of weeks it may also contain a sly reference to the publisher’s real-life legal woes in real life as well.

This begins when Clark Kent is approached by a couple of GIs looking to start a business. The pair plans to sell electronically cooked hot dogs called “Teenie Weenies.” Looking to support the GIs anyway he can. Superman springs into action and quickly makes Teenie Weenies one of the most popular hot dogs in the country.

As he does the makers of Yankee Frankies, a competitor in the world of hot dogs, sue for restraint of trade. They claim that Superman is unfair competition for their brand.

Considering that, at the time these pages first appeared, the company who owned Superman was suing the owners of Captain Marvel for essentially the same thing, this is a wildly hilarious scenario.

Superman is of course the Yankee Frank, a product with a clear reference to an American icon. Teenie Weenies represent the upstart Captain Marvel. A character created in the wake of Superman’s initial success who, just as in this story, was now outselling the original.

Inside the previously mentioned baby story a shrunken Superman flies by an image of himself seated on a “Kiddie Car” and he screams “This is the last straw!” A week later he rescues a small girl’s dolly from a go-kart accident by lifting the small car over his head. Just as he did on the cover of Action #1.

The writing credits for this collection are attributed to one of Superman’s original creators Jerry Siegel as well as writer Alvin Schwartz. Shortly after the hot dog story appears Siegel and Schuster sued the publisher DC over the rights to the strip.

Whether these little references are intentional or not, knowing what we do today broadens the meanings of these pages.

Long unavailable, these pages are pure one hundred percent comic fun. The artwork is the beginning of a classic Superman style that would serve the character well for decades. The stories alternate between silly, funny and adventurous and are always a joy to read.

Given what Superman means to this country, he is more than just a comic character. Superman: The Golden Age Sundays 1946–1949 is the sound of America exhaling after facing nothing but stress for a long, long time.