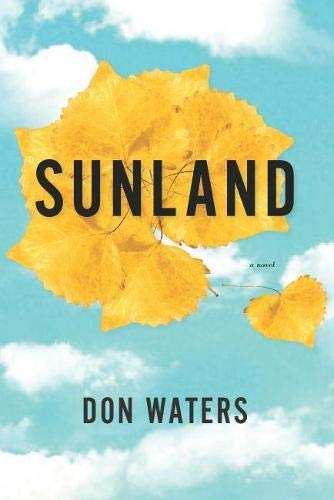 “Sunland is a flawed but auspicious debut.”

Given the chance, the Arizona Chamber of Commerce might have paid Don Waters not to publish this novel. The author tells us vividly and often that it’s hot enough in and around Tucson to drive people loco. As if to prove it, he has assembled a cast of characters in Sunland who, if not already loco, seem shy of the mark by only one or two degrees Fahrenheit.

Among them are retirees at Paseo del Sol, a retirement home where the heat gets a lot of help from dementia; a Mexican drug lord who would gladly chuck it all to be a musician; a Yale graduate who, in spite of an Ivy League education, is three bricks short of a load; and an assortment of other zanies who drift in and out of the story, taking memorable bows.

Then there is the protagonist, Sid Dulaney, who if not loco himself might as well be—and who could blame him? He was abandoned at a young age by his father, who hanged himself; and by his mother, who flew off to Alaska and never came back.

Now grown, Dulaney, recently cuckolded by two consecutive serious girlfriends, has fled job and home in Massachusetts, and wound up back in Tucson at age 33, living alone in his grandmother’s house, the house he grew up in, and she is now, at age 88, in residence at Paseo del Sol.

Worse, Dulaney has begun a dangerous entrepreneurial mission: running prescription drugs out of Mexico, where they can be had cheaply, to help his grandmother and other retirees at Paseo del Sol (and himself) make ends meet.

As Mr. Waters’s first novel, Sunland is a flawed but auspicious debut. It borders on episodic, it quits rather than ends, and its protagonist never quite comes into focus as a real being, though in fairness that might have been intentional.

Dulaney would not be the first person who could not find direction or traction through a maze of abandonment and betrayal, nor would he be the only man adrift in the margins of modern American society.

Mr. Waters is good with dialogue and description, and his word picture of a night sky in the desert sounds good enough to hang in a museum. He also brings freshness to the metaphor, as when his protagonist, watching from high ground, sees in the distance an approaching van “palpitating on the rutted road.”

And parents would do well to ponder Dulaney’s description of his suicidal dad, “who had never really understood the emotional mechanics that make for a good father. He didn’t believe in translating emotion into sentences . . . It was my childhood job to divine affection out of grunts and mumbles.”

That’s not to say that Mr. Waters doesn’t sometimes swing and miss. “Crown” is not an intransitive verb (“his streaked eyes opening when the first burning rays crowned to the east . . .”), and the author could profit from revisiting English critic John Ruskin on the Pathetic Fallacy. “A vegetable mélange watched over [emphasis mine] a bowl of purple fruit punch and sandwiches, cracker and cheeses.” Don’t think so.

Still, despite an occasional miscue, Sunland is a good read.