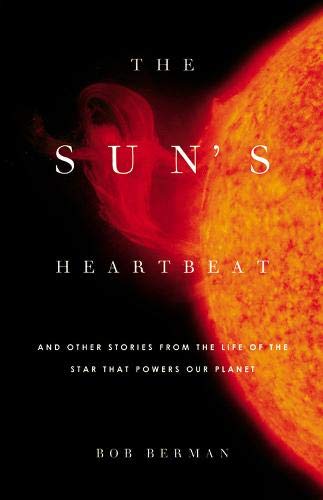 “Bob Berman takes every long forgotten notion we thought we understood about the Sun and serves it up fresh . . .”

Rhythm. It moves our feet, affects our sleep patterns, provides the very current of life. Every living thing taps into rhythm and must participate in it to survive.

The Sun’s Heartbeat is Bob Berman’s passionate appeal that our Sun not only governs life on Earth but has a rhythm all its own.

Books covering scientific topics can often be heavy slogs, but Bob Berman takes every long-forgotten notion we thought we understood about the Sun and serves it up fresh and accessible without sacrificing the least element of giddy fascination. The élan in his words borders on the romantic, lending a palpable air of almost sublime adoration of his subject.

A dry statistical analysis this is not. While not bereft of solid science to support his work his approach to the material soars well beyond the arid scope of textbooks and drops anchor in the pleasant and playful manner of one who chases his obsession like a dog chases its tail.

The Sun’s Heartbeat is the book to bring us all up to speed on the one true celebrity in our solar system; those here on Earth are mere pretenders by comparison.

Tweet-sized factoids are rarely as much fun and thought provoking as those peppered amidst the pages:

• The sun's core is 320,000 miles below its surface; that's forty Earth widths.
• In Earth's youth, the sun was 30% dimmer. In 1.1 billion years it will give off just 10% more energy, enough to boil away the oceans and sterilize the entire planet.
• Every second the Sun loses four million tons of its weight.

To an extent, therein lies the subtle irony—Twitter is a very self-centered media by which its users can declare “here’s what I’m all about at this moment, world!”

Bob Berman leaves little doubt that our only star is, at least in the astrophysical sense, the prime presence in our lives, that it, above everything else we rely upon for survival, is supreme. If we think we are the center of the universe then a simple glance skyward should be all that’s required to set the record straight.

Mr. Berman’s approach exceeds the bounds of “lively,” at once bristling and compelling in its meld of science with the satisfying ability to repeatedly draw the jaw down and up again. Without exception each chapter leads to a new discovery, and ultimately a renewed respect for the one celestial body we perhaps take the most for granted.

The author’s many years at Discover magazine serve to bring a complex subject to a level of layman understanding. His method of informing draws upon our innate sense of wonder without resorting to the drool inducing dullness of the overly academic. Principles we learned long ago in the classroom are given a fresh update and pigtailed upon the latest solar research, yet as boring as that may sound Mr. Berman makes it obvious that he’s not just passing along the latest bits, he wants us to take it all in, to marvel and appreciate (as well we should) everything—quite literally—under the sun.

Is knowing that light travels in differing wavelengths useful? If you want to understand the benefits and dangers of ultra-violet radiation it is; it could literally save your skin, if not your life.

Consider the very air we breathe, the atmosphere above our heads. Did you know it absorbs all but about one percent of the sun’s UV radiation? Not amazing enough for you? Even at a paltry 1% a sunbather is bombarded with a million trillion DNA altering protons per second. Useful information indeed.

Here's a fun fact: Because the moon has no atmosphere to block radiation, exposed flesh would receive a painful sunburn after a mere 90 seconds. Not only is the air we breathe free, but it's working hard to protect us as well.

What about sunspots and their correspondingly media-rich phases solar minimum and solar maximum? They are as essential a part of the Sun’s rhythm as our own need for respiration, or our very heartbeats.

They also affect our global climate, provide stunning atmospheric light shows, and have the potential to reduce our technological goose-step to a toddler’s crawl. “Useful” doesn’t aptly describe how important that is to us three planets away.

It is perhaps folly to think of humankind's perpetuity, the conceit that we will eventually undergo a species diaspora and spread to far reaches of our galaxy and beyond. Mr. Berman points out that our bodies are not designed to handle the staggering volume of cosmic radiation awaiting us on the other side of our atmosphere. Moreover, although our sun is breathtakingly huge by galactic measure it's mediocre. Let that sink in for a moment.

Indeed, useful and practical are removed from the theater of conceptual notions and made fundamentally necessary verbs.

The Sun’s Heartbeat beams with enjoyment—authoritative in scope and informing in a page-turning, captivating way.

Share Bob Berman’s awe and respect for the star that not only powers our solar system but helped make it all happen.

Give a copy to young readers you know; give one to anybody you know who delights in the wonders of science and nature. Pick up a few for members of your reading group—and don’t miss the reading group guide in the back.