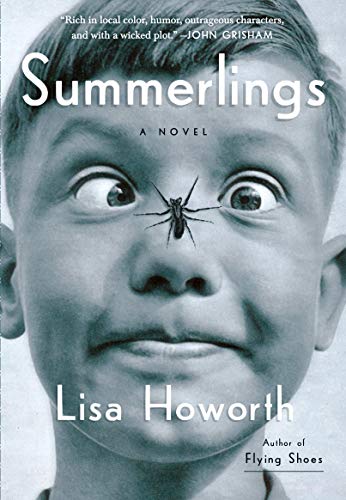 “heart is . . . what this endearing and enchanting novel exudes. Summerlings is a poignant exploration of childhood innocence as grand as the hopes of its delightful and motley cast of characters.”

Washington, DC, 1959: a city at the center of Cold War intrigue, straddling the specious innocence of Eisenhower-era culture and the inexorable prospect of nuclear annihilation. Capturing any lost world with authenticity and precision is a literary challenge, but in our own age of cynicism, bringing to life the naïve hopes and clean-cut promise of baby boom America in a manner that can convince present-day readers is a particularly daunting task. Fortunately, Lisa Howorth’s charming, impeccably detailed Summerlings is a rare gemstone of a novel that proves both emotionally resonant and truly transporting.

The story centers around John Mannix, a nine-year-old boy living on Connors Lane, and his cohort of friends: Max Friedmann, the child of Jewish-Austrian refugees, a year older and relatively wise in the ways of the opposite sex; Beatriz Montebianco, the daughter of the Brazilian cultural attaché, an “unbridled tomboy” and religious Catholic whose bickering with Max masks romantic undertones; and Ivan Goncharoff, whose Ukrainian father has escaped Stalin’s Soviet Union to become the United States Ambassador to Mexico. Hints of John’s interest in Ivan transcending platonic affection pepper the text—but always subtly, as though he himself is unware, as the boy strives to parrot the homophobia of his elders.

The large, distinctive cast of secondary characters prove an ensemble as compelling as any in recent fiction. Among the most vivid in this “Whitman’s sampler” are General de Haan, a Dutch military officer and a one-time Nazi sympathizer who bans Max from his swimming pool; and Ivan’s Aunt Elena, a free-wheeling beauty and leftist sympathizer who comes to live with the Goncharoffs after the death of Ivan’s mother.

Historical figures also pop up in the text: John’s father befriends Jacob Beser, the radio specialist who flew on the separate missions that bombed Hiroshima and Nagasaki. Elena’s dates include Communist revolutionary Camilo Cienfuegos, who served briefly as the Cuban army’s chief of staff under Castro. John’s mother befriends the poet Ezra Pound while they are both psychiatric patients at St. Elizabeth’s.

Three events converge to form the backbone of the novel. First, an epidemic of exotic arachnids descends upon the nation’s capital, cloaking the city in their webs. John’s grandfather, Brickie, an executive with the United States Information Agency, discovers a poisonous brown recluse in his office. Slutcheon, the neighborhood bully, threatens the boys with a deadly black window. Later, a venomous scorpion called a vinegaroon is discovered in the city. Whether these creatures are instruments of Soviet biological warfare, as some suspect, remains uncertain.

Second, the friends develop their “Beaver Plan,” modeled after the popular television sitcom, Leave It to Beaver, to generate harmony in their neighborhood—although, as the adults suspect, they made also have an ulterior motive in hoping of entering General de Haan’s good graces so they may all swim in his pool. The plan centers around hosting a Fabulous Family Fiesta, whose live entertainment will include displays of prowess on the hula hoop and yo-yo.

These events occur against the darker backdrop of Aunt Elena’s brewing conflict with Ivan’s father, punctuated by multiple episodes of domestic violence. They converge in a masterful crescendo that proves a testament to the author’s narrative skills.

Yet much of the magic of the novel lies in the loose ends, the hints of a larger and more complex universe that remains beyond a nine-year-old’s ken. To Howorth’s credit, she allows this innuendo to linger, rather than tying it up in a bow.

So John learns from the older boys down the block that his grandfather writes under a pen name, Guy Fitch, but we never learn the full purpose of Brickie’s pseudonym nor its ideology. John’s mother may have had an affair with a Jamaican knife sharpener, precipitating her divorce and departure to the asylum—or this may prove entirely false speculation. The novel’s genius lies in giving us enough answers, but not all of them.

Howorth, now an independent bookseller in Mississippi, was a fourth-generation Washingtonian of roughly the same age as her protagonist. She relays the details of the world John explores with impeccable precision—not just the cultural references, which one might learn from second-hand research, but the authentic ethos of the moment. Her adults down Milltown like candy; her kids crave Zagnuts and potato-chip sandwiches. Class and cultural differences are conveyed through choices of cigarette brands (Elena’s Vogues, Grandma Dimma’s Chesterfields) and cocktails and car models. She knows her bygone Washington neighborhoods with a sensibility one could never garner from a Frommer's guide or a Baedeker’s.

The cultural references are embedded, rather than gratuitous or papered on.  John’s grandfather is “the Colonial Saito of breakfast,” an allusion to The Bridge on the River Kwai. His scorn for the serenading knife vendor is expressed with perfect pitch in the convincing, albeit racist, quip: “Harry Belafonte needs to tally his bananas somewhere else.” Max, for whose Jewish parents Wagner is “verboten,” learns to hum “Ride of the Valkyries” from a Bugs Bunny-Elmer Fudd cartoon. Not once does the author slip—a remarkable accomplishment.

Howorth never loses sight of the quirky foibles of boyhood. John recalls, for instance, how his friends “melted down Ivan’s old box of forty-eight [Crayolas] on his backyard grill, hoping to make one giant rainbow crayon. . . .” (Full disclosure: This review tried a similar stunt in chilhood with as limited success.) These are kids who believe Kotex are mattresses for mice, who are too young for the sexual suggestiveness of Auntie Mame! And Howorth makes us adore them, while simultaneously leading readers on a rich, mature and all-too-adult adventure.

In another of the great tributes to 1950s Washington, Damn Yankees, a trio of perennially-vanquished Senators teammates sing: “You Gotta Have Heart!” And heart is exactly what this endearing and enchanting novel exudes. Summerlings is a poignant exploration of childhood innocence as grand as the hopes of its delightful and motley cast of characters.