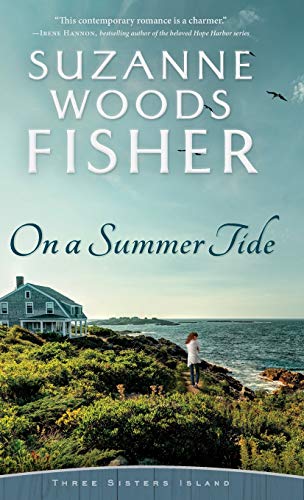 Paul Grayson's three daughters believe he is losing his mind when he informs them he sold the family home and bought 51% of a desolate island off the coast of Maine. Paul had met the girl's mother Corinna while in college when they were counselors at Camp Kicking Moose. That's where they fell in love, and he always promised they'd go back to visit. But Paul, working as a sports announcer, was so busy they never got the chance. Now at age 59, Paul is retired and widowed after his wife perished in a fire, and he's looking for a new start.

As he tells his girls about his purchase, mentioning as majority owner, he is renaming the island:

"Now everyone's curiosity was piqued. Blaine tipped her head. 'What's wrong with the name it has?'

"'Too hard to pronounce, so most don't bother. Its official name is Niswi Nummisis. . . .'

"'. . . Aren't you even interested in knowing what it means?' He had a smile on his face like a cat that swallowed the canary.

"Maddie took the bait. 'What does it mean?'

"'Niswi Nummisis is Algonquin for Three Sisters.' His grin spread from ear to ear. 'I'm calling it Three Sisters Island.' Then scarcely audible now, he said, 'Because someday, my dear daughters, it'll all be yours.'"

The girls are appalled. The oldest, Camden, 28, is like her dad with type A personality climbing the corporate ladder while also mom to seven-and-a-half-year-old Cooper whom she adopted. Middle daughter Madison, 24, recently completed her master's degree as a marriage and family counselor and is in the process of getting certified. The youngest at 18, Blaine cannot decide on a major and is floundering.

The sisters each have separate idiosyncrasies: Cam lives her career 24/7; Maddie is filled with anxiety; Blaine does not know what to do with her life. Though somewhat close, they are often at odds with each other, but will this change?

Summer is approaching and Paul wants his family to be with him to make the camp ship-shape. Little do they all know the place is fallen into ruin, which does not deter Paul. Instead, he looks at this as an adventure. With the small population of long-time Mainers, the newcomers are looked at as foreigners, which alarms the sisters. In addition, the girls are horrified there's no Wi-Fi, and the area is often prone to lose electricity. What is Dad getting them into?

Before long the tiny island casts a spell on them all, yet will they remain there? Cam is anxious about Conner who is dealing with some emotional problems, yet is also worried about her job. When she meets the local teacher, Seth Walker, she realizes he is a kind and caring man, and Connor clicks with him at once making Cam notice her son growing more outgoing and confident.

Maddie, about to be married, is having second thoughts when her future mother-in-law takes over the reins to plan their wedding without her input.

Blaine, who once loved cooking and baking with her mom, makes suggestions to Peg Legg, the colorful owner of the diner combination general store. Peg is a total flop in the kitchen and comes to depend on Blaine to whip up her fabulous meals and desserts, offering Blaine the opportunity to find her purpose.

Suzanne Woods Fisher, well known for her Amish and inspirational fiction, offers a contemporary novel of a family rebuilding their connection, adding a touch of suspense and just enough spirituality to make this a heartwarming read.