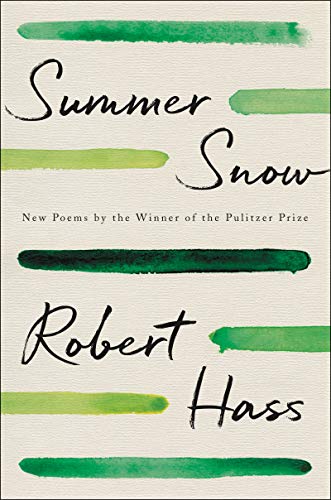 “[the author’s] perceptions remain young and fresh and are as vibrant as any poet’s working today.”

Robert Hass has become one of the living Grand Masters of American poetry. He has achieved his position by building a body of work slowly and consistently, always adding to themes and techniques he began exploring as a young poet. Summer Snow is his first collection since he published The Apple Trees at Olema almost ten years ago, and even that book was a “New and Selected Poems,” albeit one of the more significant of those we’ve had in quite some time.

In this new collection we can find quick, precise observations captured in short lines, much like those Hass wrote almost 50 years ago:

“After days of wind,

The leaves of the aspen are still.

The leaves of the alder and cottonwood,

Juddering for days and cold,

The lines are uncluttered and vivid, but we are suddenly surprised by the word “juddering,” an unfamiliar word but one that seems absolutely appropriate even before we look it up to make sure Hass didn’t invent it.

But Hass also has longer poems made with long prosy lines that stretch across several lines and that often transform themselves into prose. In those longer poems, he is comfortable quoting other writers, or telling stories about them, using these other people as examples of living the life of the poet. He must mention 40 or 50, maybe more writers in this book, but none more than the Polish Nobel laureate, Czeslaw Milosz, with whom Hass worked very closely for many years doing English versions of Milosz’s poems.

In “An Argument About Poetics Imagined at Squaw Valley After a Night Walk Under the Mountain,” Hass feels comfortable enough in his friendship with Milosz to construct an argument he tells us he never had with the older poet. The poem begins, “My friend Czeslaw Milosz disapproved of surrealism.” Hass recounts several stories he may or may not have heard from Milosz about his life under German occupation during WWII—“After that he doesn’t want to read about French poets/Walking lobsters on a leash and doesn’t want to seem/To celebrate the fact that the world makes no sense.”

That willingness to engage in ideas—always founded in the precise observation that is the fundamental place of Hass’s aesthetic—allows him to write easily about philosophy, history, and politics. “Seoul Notebook,” a longish poem that recounts discussions and encounters at an international conference on peace, can easily enclose an observation like this—“Dialogue is not an easy way to peace. Dialogue begins not from politeness but from the possibility that the other may have legitimate claims, an attitude that is only bred, often, once violence has exhausted itself.” It is hard to think of another American poet who might risk such an abstraction in their poems.

Hass’s poems digress and diverge constantly. One begins with an iris in a glass vase on the kitchen counter, then jumps to 17th century Dutch painters, and ends with a vivid image of rain falling in a mountain pool in what is probably the High Sierras behind the poet’s house in Berkeley. And he does all of this, goes to all these places, in one page.

As Robert Hass approaches his ninth decade, he is comfortable in the wisdom and craft he has learned over a long and active life in his art. But his perceptions remain young and fresh and are as vibrant as any poet’s working today.