The Summer of Kim Novak 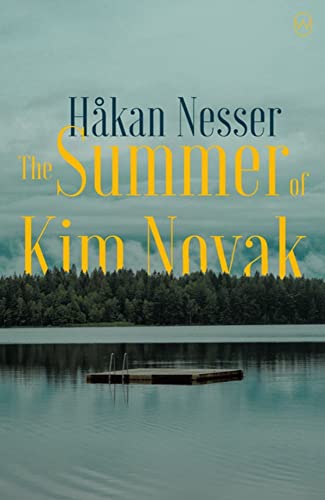 “The Summer of Kim Novak brings back to life that adolescent quandary of feeling like you know more than the adults around you, but being desperately afraid that you won’t choose the right action to justify the trouble you’re already in.”

What can you expect when a master of Swedish crime fiction turns his hand to a coming-of-age novel focused on a pair of 14-year-old boys? Yes: passion and puzzlement. No: no simple answer, no certain motive, and who’s the perpetrator here anyway?

The Summer of Kim Novak opens as a recollection by Erik of the events leading up to what he still calls “the Incident,” something that happened in summer of 1962. From Erik’s point of view, school and home both consist of uneasy alliances among boys and men, with enormous mystery embedded in the few females close enough to view: his dying mother (in the hospital with cancer), his much older brother’s girlfriend (she has a “shelf” that he admires), and the arrival of a stunningly beautiful substitute teacher at his school, one who resembles the actress Kim Novak.

This may be a good moment, for readers too young to have been struck by this actress’ power in Alfred Hitchcock’s Vertigo or The Man with the Golden Arm, to check out this blond bombshell in her prime, online. But the point, judging by the speechless reactions and uncomfortable bedtime experiences of Erik and his buddies, is that this is a Woman: the kind you fantasize about. Finding her in your classroom is overwhelming.

Soon Erik and a relatively new friend, Edmund, are exiled for the summer to a tumbledown cabin on a lake, along with Erik’s older brother Henry. This situation, framed by Erik’s dad in constant phrases like “there are no two ways about it, we’re looking at a rough summer” (avoiding saying “your mom’s going to be dead soon”) and “it is what it is,” begins as a bit of teen boy heaven: swimming, building a dock, rowing a battered boat, staring at occasional females, and camp cooking.

But Henry, against all odds, soon adopts the substitute teacher, Ewa, as his new girlfriend. Erik and Edmund manage to catch a glimpse of what real sex is like, and each in his way falls in love with Ewa, too, though they are only 14 and clearly out of the running. Håkan Nesser hints broadly all along that there’s going to be a violent consequence, so it’s no spoiler to say that murder follows.

“It’s the police’s job to turn dead bodies over, not Lasse Side-Smile’s. No, Side-Smile doesn’t identify the man in the clearing; we do. Henry and Edmund and I, because we’re the ones he comes running to, shouting at the top of his lungs. And it’s we who run with him up the path, and we who stand in a circle around [the dead man], and not one of us says a word. . . . For a full thirty seconds, four people just stand there, staring at a fifth who is no longer a person, and these are the longest thirty seconds of our lives.”

The final one-third of the book circles around how Erik deals with this “Incident,” as well as with his teen angst over the involvement of the most beautiful woman he can ever imagine.

The book’s written from an acutely male perspective, and there’s a lot of mention of “boners” and similar teen discoveries. But Nesser keeps the suspense tight, and even when “the Incident” finally occurs, it’s clear Erik is at risk. Never losing the teen perspective until a couple of chapters from the end, The Summer of Kim Novak brings back to life that adolescent quandary of feeling like you know more than the adults around you, but being desperately afraid that you won’t choose the right action to justify the trouble you’re already in.

Bear with the opening chapters and their discomforts; to see the hand of this master storyteller ramp up the stress and tension is well worth the time invested. And in the end, the resolution’s not too far from that of a Kim Novak performance after all.