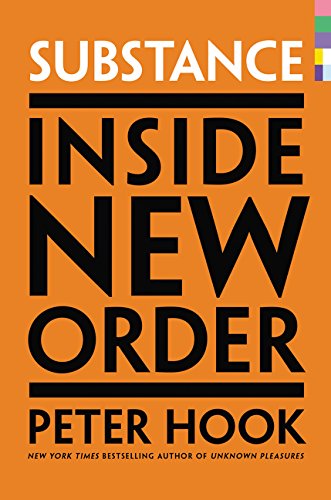 When promoting Inside Joy Division in 2012, Peter Hook hinted that a tell-all New Order book might be in the pipeline. With New Order performing live without Hook, he had decided that the “gloves are off” in terms of writing about his years in the band. And, with the publication of Substance: Inside New Order, the gloves are indeed off. In a 700-plus-page, intricately detailed account of life in New Order, he covers in exhaustive detail the tortuous recording process and on tour bad behaviour as well as his own tumultuous personal life.

It has been established, not least by Hook’s accounts in both The Hacienda: How Not to Run a Club and Inside Joy Division, that he and New Order singer Bernard Sumner had a difficult relationship. And in Substance, barely a page can go by without a sly or outright dig at Sumner. Their tense relationship is really the main theme of the book, and it is clear that Hook’s feelings are complex. He clearly admires Sumner’s talent, at points there is a grudging respect, and there is also a whole lot of hurt.

To his credit, Hook honestly depicts the various bruises to his ego and disappointments over the band’s decisions. It easy to empathize and feel Hook’s frustration when Sumner repeatedly attempts to curb his creative input.

The other recurring theme throughout is getting laid on tour. Anyone familiar with New Order is well aware they were no angels, especially during their 80s peak. However, the constant references to his womanising is tiresome, especially when it is part of a one-upmanship with Sumner.

Sometimes the various flings are part of a longer on-tour tale (Hooky caught with his trousers down again!) but often there is absolutely no legitimate interest or narrative merit to the frequent allusions to pulling. For example, “Afterwards one of the girls asked me if I wanted to go shopping on Melrose with her, and like a dickhead I refused, preferring to stay in a sweaty caravan, doing drugs with people I hated.”

Sometimes he cannot help but boast. “By this time we were getting so many girls that I just decided to go for the prettiest in the dressing room.” This is mostly cringe-worthy rather than particularly offensive, but coupled with the fact that the majority of the women in the book are either conquests or nagging crones, and he openly admits how rude they were to one female journalist on tour for no good reason, it does all rather reek of misogyny. While surely not the intention, it does seem that he may have forgotten his female readership in all this, his imagined reader clearly male, with ol’ Hooky regaling stories from one lad to another.

At least Hook can be trusted to give all the gory details, and there are some genuinely funny stories as he delivers many a postcard from the edge. The drugs and parties are aplenty, and this book is not short on Factory and Hacienda tales, with walk on parts for all the people they meet during the 80s and 90s.

Along with very personal details, he manages to give a feel for the times they were living through. For example, Hooky recounting Gazza’s exploits during the recording of World in Motion in 1989, drinking “three bottles of champagne in fifteen minutes” is evocative of a certain moment in time culturally, before the proverbial hit the fan, for both Gascoigne and the band.

Many other famous faces make cameos, in often unexpected places. At one point, while on tour in the U.S., he is in a thrift shop waiting impatiently behind a man haggling for 25 dollars off a pair of motorcycle boots. The tightwad turns out to be none other than Bruce Springsteen. While his drunken boorishness will result in him being packed off to the Priory, the trouble Hooky gets himself into on the way is at least amusing. “Bono, Iggy Pop, Cher—I’ve aimed bread rolls at all of them.”

Hook’s matey tone mostly entertains, but at points there seems to be a real lack of awareness of what would be interesting to the reader, or what they necessarily need to know, and the reminiscing begins to grate. Run-ins with Springsteen, yes, descriptions of the seemingly countless and supposedly hilarious times when Keith Allen has exposed his genitals, less so. Often, it reads like “My Diary of the Groucho Club.” Creative formatting made The Hacineda: How Not to Run a Club a surprisingly clever and entertaining read, and it remains his best volume. It draws on a lot of the same material as Substance, but its unique premise gives more focus to his anecdotal style.

The lack of self-awareness can, at times, be unintentionally hilarious. Take, for example:

“Personally, I think he was jealous of a leather coat I had been given by Gary Aspden at Adidas. I was wearing it that night for the first time and he couldn’t stop looking at it, echoes of the All Saints split. The end result was I felt even more isolated, and the rift widened.”

Both Hook and Sumner would have been around 50 years old when this incident of leather coats at dawn took place. But the straight faced reference to the demise of the popular 90s girl band is an endearing observation from the man who wrote the bass guitar line of Love Will Tear Us Apart.

Power struggles in bands are of course nothing special. With so much detail of every small spat, much of it unnecessary, it seems a little more subjective analysis would have made for a more satisfying read. While meticulously researched in his self-appointed role of Joy Division, New Order and Hacienda historian, it would have benefitted from some other perspectives.

Such a beefy book could have taken a more in-depth look at the changing music scene, their relationship with Manchester, or what New Order mean to their fans. That’s not to say these themes do not feature, and his detailed cataloguing of the bands history is impressive, but what it requires, oddly, is a little more substance.