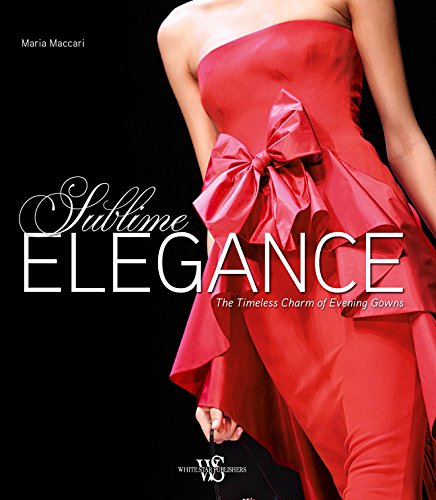 What perplexes most is that if an author is going to immerse herself in a subject, why can’t she be fluent with the language and vocabulary of that topic?

The subtitle of this book is misleading as it does not exclusively address the topic of evening gowns. More appropriate would be less specific terminology and a broader category such as evening wear rather than evening gowns.

Maccari writes of a more inclusive discussion of all forms of evening wear from palazzo pajamas to Le Smoking, ball gowns and cocktail dresses as well as the more general classification of all silhouettes of evening gowns.

While the book is visually stunning the text is rather disturbing and even worse it can be haltingly incorrect; to say that Karl Lagerfeld learned from Saint Laurent is a gross misstatement as well as putting in print that Ferre was known for color. Saint Laurent and Lagerfeld were contemporaries as well as friends and rivals but hardly student and teacher. Ferre was well known for his stark studies in black and white as well as pinstripes and maybe he was known for opulent embroideries but never color. Oscar de la Renta never did an haute couture collection under his own name. While these might seem paltry points, they will be glaringly incorrect to the seasoned fashionphile. The book is filled with such misguided observations that can only be construed as personal assessments rather than verifiable facts.

Another disturbing aspect of the book is the author’s choice of words. Take for example the usage of the word stylist instead of designer and the term tailor instead of dressmaker, which for the less informed reader will cause major confusion. The words themselves are a bit off as well as well as how she deems to define such terminology as siren gowns, which traditionally are sexy, close to the body styles but not according to her photos.

For the trained fashion reader there will be an endless disconnect between text and visuals. A for instance here is that Maccari speaks to John Galliano’s referencing Maison Dior’s past and yet never offers the most obvious reference which would be the bar jacket that Galliano repeatedly massaged during his tenure at Dior.

This is a book for those who will leaf through it rather than read it as so much of the text is rather misleading, possibly because of a case of “lost in translation.” Visually, the book is beautiful, but when it comes to matching text to photos, there is a huge schism.