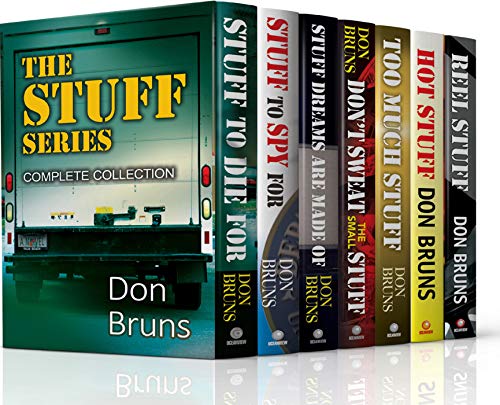 Don’t Sweat the Small Stuff is the fourth installment in Don Bruns’ addictive Stuff series, featuring protagonists James Lessor and Skip Moore (think Jim Rockford and Columbo on acid, though the Smothers Brothers get the nod from the author). Alarmingly, our two everyday learn-as-you-go heroes have not only qualified as private investigators, but have actually received their licenses from the Department of Agriculture to prove it. Perhaps if the Department of Agriculture had seen the name of James and Skip’s PI agency, MORE OR LESS, they would have had a rethink in handing out the licenses, more or less.

Their first official case takes them to a dubious carnival, where deaths and injuries are occurring on an almost daily basis. There they encounter a variety of equally dubious carnival characters who manage to get the PIs more confused than what they were before.

Within minutes of arriving, James and Skip start to carry out a secret investigation, suspecting everyone and their great aunt. The problem is that the secret investigation is only secret to the two friends. Even the animals in the tents know about it. It doesn’t help when the only advice they get from all the colorful employees is to trust no one—especially anyone offering advice or looking strange. While attempting to work undercover, the pair encounters numerous suspects including a paranoid dwarf who runs a petting zoo and his tequila-slamming lover. There’s also a stunning blonde—dubbed early on as Agent Hot Pants—thrown into the mix, and enough dodgy characters to keep the two PIs looking over their shoulders at every given chance.

Seeking cooperation from the local inhabitants is high on the agenda, but after a petrifying journey on the Dragon Tail ride, some fisticuffs in Freddy’s anything-but-fun Fun House, and a variety of threats, the PIs soon realize they’ll get anything but cooperation. Finally, when a carnival worker is murdered while they are on the job, a light bulb goes on above the heads of James and Skip: They might be next in line for the mortuary and have the shortest careers of any PIs in law enforcement history.

At the beginning of the case, success for our two PIs is finding the killer. Now it would appear that getting out alive from the carnival of death would mean even bigger success. Further into the story, it would seem as if the wily manager of the carnival may have actually hired them because of their incompetence, and not because they are expected to actually come up with clues to the identity of the actual killer. The carnival has never seen such chaotic fun since its inception.

What makes Bruns’ books stand out from most crime/thriller reads is the lack of gratuitous violence and dourness: no chopped-up corpses, heads arriving via UPS, or eyeballs floating in soup. Instead, we get good old belly laughs in almost every page, and as we turn each page, the more we want the two friends to be our friends. There is a great natural chemistry between the two protagonists, and a zany originality in the storylines to make the Stuff books compulsive reading.

In this latest, there are more twist and turns than on the Dragon Tail ride on a summer weekend. Add bullet-fast one-liners and a cast of characters to die for (literally and figuratively) and you know Bruns is on to another winner.

One of the funniest books to hit the stores this year, no sweat.