A Student of History 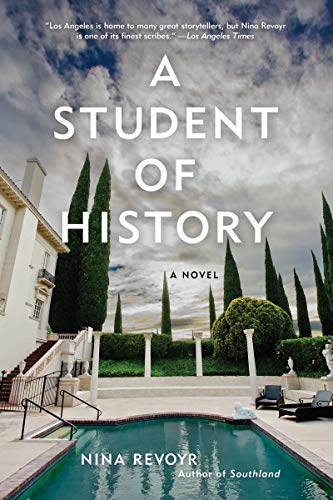 “With her two Walter Mosley-like gifts—impeccable narrative pacing and masterful command of Los Angeles’ intricate, evolving dynamics of race and class—Nina Revoyr’s L.A. novels convincingly capture the lifespan of Los Angeles as a major city, none more gracefully than A Student of History.”

In Nina Revoyr’s accomplished trio of Los Angeles novels, Southland (2003), The Age of Dreaming (2008), and her newest, the powerful and provocative A Student of History, L.A.’s present and formative past collide consistently and often without warning. These moments happen more naturally then they could in novels set in more venerable East Coast cities because living connections to L.A.’s beginnings as a major American city still walk among us.

A little more than a century ago, Los Angeles was a small and dusty agricultural town that only began to boom after future “water czar” William Mulholland initiated a massive aqueduct project to irrigate it. In doing so, he opened the floodgates for the film industry and the vast, populous, and multitextured city we know today.

With her two Walter Mosley-like gifts—impeccable narrative pacing and masterful command of Los Angeles’ intricate, evolving dynamics of race and class—Nina Revoyr’s L.A. novels convincingly capture the lifespan of Los Angeles as a major city, none more gracefully than A Student of History.

In Southland, three generations bridge a neighborhood’s earliest ethnic transitions and migrations, the bitter days of Japanese removal and internment in 1942, the chaos and devastation of the Watts uprising of 1965, and the aftermath of the riots that engulfed much of the city following the acquittal of Rodney King’s assailants in 1992.

In The Age of Dreaming, it’s the half-forgotten early history of filmmaking’s silent era in one time frame and the travails of its still-living relics four decades later.

In A Student of History, L.A.’s 21st century present, in the person of Ph.D. student Rick Nagano, meets its storied past in Marion W—, presiding grande dame of one of its oldest, wealthiest, and most secretive “original” families—families with streets named after them in Beverly Hills. Mrs. W— represents a living link to her grandfather, of one of the city’s founding oil barons.

Rick, a son of striving Japanese and Polish immigrant parents, has all but worn out his welcome in the University of Southern California History department: his dissertation stalled, and his fellowship about to expire. His best friend in the program, having finished her Ph.D. and accepted a job in San Francisco, suggests that Rick take over her well-paying part-time gig as “research assistant” to Mrs. W—.

The job, as Rick discovers, essentially consists of typing up Mrs. W—’s voluminous hand-written journals at her majestic Bel Air mansion. Though the journals prove to be fairly mundane diurnal stuff, Rick desperately parlays the association into continued funding for his graduate work by falsely claiming full access to the W— family archives. This canny bluff leaves his dissertation adviser practically salivating over the possibility of unearthing a treasure trove of undiscovered first-hand L.A. history.

Rick’s duties with Mrs. W— also include serving as a companion of sorts to the elderly heiress, sometimes at her home and others at her side at galas and benefits involving Mrs. W—’s various charitable concerns. These duties require a complete Rodeo Drive wardrobe overhaul at Mrs. W—’s expense, so that Rick might better look the part in the social spheres in which he will be circulating. At his first event, he meets a thirty-ish blueblood heiress named Fiona Morgan who takes a keen (and somewhat confounding) interest in him and his work, and quickly becomes Rick’s romantic obsession.

If all of this sounds a bit reminiscent of Dickens’ Great Expectations, that’s certainly by design, although the sharp-tongued, strong-willed, and resolute Mrs. W—, however solitary and long-widowed, is considerably more socially agile and mobile than the mad and reclusive Miss Havisham.

As in Dickens, the clash of worlds-apart social strata stands at the heart of A Student of History, and Revoyr’s astute and incisive observations of class difference provide the book’s most striking moments. Rick’s dizzying infatuation with Fiona notwithstanding, he isn’t some Pip-like orphan ingenue, or even an immigrant greenhorn like his parents must have been at his age.

If his already-fizzling academic career locates him far closer to his first-generation American, working-class parents than the rarified air of Beverly Hills, Rick doesn’t fully identify with either world. Approaching his awkward first meeting with Mrs. W—, Rick muses, “With the particular arrogance of the overeducated and underemployed, I didn’t believe the rich could teach me anything.”

It’s hard to write a book about the social whirl of the super-rich observed from its periphery without evoking The Great Gatsby—especially when the book’s denouement concerns a car wreck and its consequences, as in A Student of History and Jeffrey Lewis’ Meritocracy: A Love Story.

But A Student of History is no straight-up Gatsby homage in the manner of Stephanie Powell Watts’s No One Is Coming to Save Us, which consciously transposes Fitzgerald’s East Egg and West Egg from Long Island Sound to two African American neighborhoods in a North Carolina town.

Still, A Student of History delivers distinct echoes of Gatsby as dazzling wealth obsessively studied and judged by an aspirant with temporary access to its environs. And in the arrogant, blustering bully Bryson Rutherford, Revoyr has imagined an old-money boor to go blow for blow with the aggressive, pugnacious, eugenicist Tom Buchanan.

Rick Nagano is no more of a true working-class hero than Nick Carraway, but as an immigrant electrician’s son he’s certainly a scion of the working class with an acerbic take on the world he’s been given a glimpse of. Even with his upgraded wardrobe, he remains an anomaly among L.A.’s leisure class: “There were no Mexicans, Chicanos, Central Americans, Puerto Ricans, or anyone else who could be remotely conceived of as brown, black, or Asian in Mrs. W—’s world. The only person of color was an ambiguous half-breed: me.”

As for nuances among the elites, consider Fiona’s commentary on class distinction, surveying “a sea of ladies milling about” at one gathering: “a few of them were from finance or law—members, she said, of the working class, by which she meant they had to work.”

At its best, A Student of History reflects insightfully on not just class and history but their intersection in a young city’s living (if fading) reminders of its origins. “Mrs. W— once told me that the most important history never made it into written accounts,” Rick recalls— “that she, and people like her, were history . . . People like her, like the Harringtons, the Bakers, the Fehringers—they’re the ones who make the world run.”

Researchers might recognize their imprint on the politicians they manipulate, the policies they dictate, and the buildings that bear their names. But historians can’t really see “the Mrs. W—s of the world” who have the power and guile to hold themselves aloof from closer scrutiny. “To those who might study their influence, they are more than inaccessible. They’re as invisible as phantoms, as gods.”