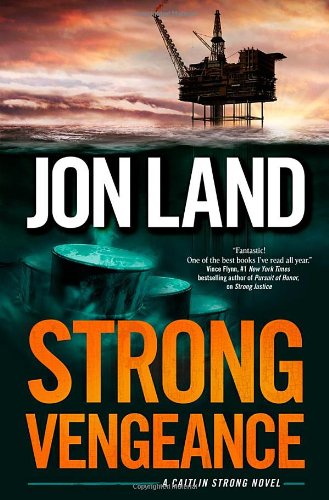 “. . . totally addictive . . . Powerful and not to be missed, Strong Vengeance is the best Caitlin Strong book yet.”

1818: In the Gulf waters off the Texas coast the pirate Jean Lafitte and his partner Jim Bowie launch an attack on the Mother Mary, a slave ship carrying an invaluable treasure.

The Present: Fifth-generation Texas Ranger Caitlin Strong finds herself investigating the murder of the oilrig crew that discovers the long-lost wreckage of the Mother Mary.

The crew also uncovers something else beneath the surface of the sea—something connected to a terrorist attack about to be launched by a mad American-born cleric who has recruited an army of homegrown terrorists.

With the stakes higher than any she has encountered before, Caitlin races to find the connection between the secret treasure of the Mother Mary and the deadly secret hidden on the bottom of the ocean.

After the fascinating historical prologue in which Jim Bowie and Jean Lafitte make guest appearances, the gripping opening pages of Strong Vengeance begin with an armed siege at Thomas C. Clark High School, where sixteen-year-old William Langdon is suspected of holding hostages.

Into the deadly frame comes Ranger Caitlin Strong, who arrives on the scene because Dylan, one of two sons belonging to her sometime lover and former outlaw Cort Wesley Masters, is in the school.

Four months ago, Masters had turned himself into the Texas authorities on an extradition request from the Mexican government. The first two of those months had been spent in a federal lockup and the next two in the infamous Mexican Cereso prison just over the border in Nuevo Laredo across the Rio Grande.

With no other adult in the lives of his two teenage sons besides an aunt who lives in Arizona, Caitlin has taken it upon herself to step in and fill the void. Hence her turning up at the school.

“This isn’t your play, Ranger Strong,” Captain Consuelo Alonzo of the San Antonio police said to Caitlin Strong beneath an overhang outside the Thomas C. Clark High School. Her hands were planted on her hips, one of them squeezing a pair of sunglasses hard enough to crush the frame.

Caitlin took off her Stetson and let the warm spring sunlight drench her face and raven- black hair that swam past her shoulders. Her cheeks felt flushed and she could feel the heat building behind them. She’d left her own sunglasses back in her SUV, forcing her to keep her view shielded from the sun, which left the focused intensity in her dark eyes clear enough for anyone to see. Her cheekbones were ridged and angular, meshed so perfectly with her jawline that her face had the appearance of one drawn to life by an artist.
Caitlin met Alonzo’s stare with her own, neither of them budging.

“Then I guess I heard wrong about a boy with a gun holding hostages in the school library.”

“No, you heard right about that. But this isn’t a Ranger matter. I didn’t call you in and my SWAT team’s already deployed.”

Caitlin gazed at the modern, two-story, L-shaped mauve building shaded by thick elm and oak trees. The main entrance was located at the point of the school where the L broke directly before a nest of rhododendron bushes, from which rose the school marquee listing upcoming events, including graduation and senior prom.
A barricade had been erected in haphazard fashion halfway to the street to hold anxious and frantic parents behind a combination of saw horses, traffic cones, and strung-together rope.

“SWAT team for one boy with a gun?” Caitlin raised.

A news helicopter circled above, adding to Alonzo’s discomfort.

“You have a problem with that? Or maybe you’ve never heard of Colombine?”

“Any shots fired yet?”

“Then I do have a problem, Captain. I do indeed.”

Alonzo’s face reddened so fast it looked as if she were holding her breath. She’d lost considerable weight since the day Caitlin had met her inside San Antonio’s Central Police Substation a couple years back. They had maintained a loose correspondence mostly via email ever since, both appreciating the trials and tribulations of women trying to make it in the predominantly male world of law enforcement.

Plenty accused Caitlin of riding her legendary father and grandfather’s coattails straight into the Rangers. But Alonzo’s parents were Mexican immigrants who barely spoke English and lacked any coattails to ride whatsoever. She was still muscular and had given up wearing her hair in a bun, opting instead for a shorter cut matted down by her cap.

“This is the Masters boy’s school, isn’t it?” Alonzo asked Caitlin.

“Yes, ma’am. And he still uses his mother’s last name—Torres.”

“Well, I can tell you the son of that outlaw boyfriend of yours is in one of the classrooms ordered into lockdown while we determine if there are any other perpetrators involved.”

Caitlin glanced at the black- clad commandos squatting tensely on either side of the entrance. “When was the last time your SWAT team deployed?”

“That’s none of your goddamn business.”

The veins over Alonzo’s temples began to throb. “You’re wasting my time, Ranger.”

“And you’re missing the point. You’re going in with SWAT without exhausting any of the easier options.”

The consequences of the shootout turn out to be disastrous for Caitlin, if not for justice. The hostage-taker is killed, but an innocent boy is shot, doomed never to play football again. For her troubles, Caitlin is banished to a desk job for the Rangers and advised to take time out and look after Masters’s two boys, Dylan and Luke.

Caitlin eventually decides to take the boys on a fishing trip down in the Gulf, a trip that will not only help solve a killing that happened 30 years ago that her father and grandfather were forced to stop investigating, but a trip that will end in deadly secrets being revealed, along with death and more murder as she finds herself on the trail of homegrown Islamic terrorists intent on launching a devastating attach against the United States.

The Caitlin Strong series is totally addictive, with a believable cast of fascinating characters and absorbing plotlines. The series is additionally enhanced by Mr. Land’s expertly weaved prose which is always refreshingly original yet totally authentic.

Together, these elements form an impossible-to-put-down read. From its shocking opening to its stunning conclusion, Strong Vengeance never takes a rest, and will add more followers to the legions of Caitlin Strong aficionados.

Powerful and not to be missed, Strong Vengeance is the best Caitlin Strong book yet.