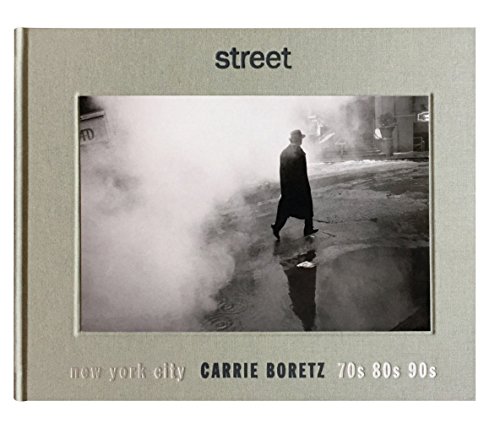 Carrie Boretz’s Street is not just another collection of New York City photographs. A native New Yorker, born and raised in Long Island, Boretz’s affection for her stomping grounds resonates loudly in her candid photographic recounting of 1975 through 1997.

Consider the technological era that informs this work, and the stark contrast to what one would encounter out and about today. These 106 black and white images were shot before the rise of widespread accessibility to portable electronics, and subsequent fall of imagination, self-reliance, and human interaction.

This was a time when people were not transported elsewhere during their commutes through an auxiliary cord, but forced to relate to their surroundings spatially, verbally, and visually. Boretz’s images capture New Yorkers trapesing through their days, aware of the beautiful world around them.

While the subjects and scenes are not posed, the photographer’s compositional elections are distinct. Her muses connect with one another, and she carefully includes horizon lines and building facades in the landscape that sometimes complement, and other times compete for top billing.

In one photo entitled “Seventh Avenue and West 111th Street 1979” we peer down West 111th street while pedestrians and buildings populate the shadows as far as the eye can see. In the foreground a man lies on the sidewalk and one worries that he is dead rather than asleep. With a skillful hand, Boretz successfully teeters her attention from humanity to infrastructure and celebrates the soulful dance of the two in “the city that never sleeps.”

We are offered a peek at her honest commentary on New York through her visual archives of race, class, fashion, obsolete technology, automobiles, and general culture as she oscillates between imagery of the working class on subways, to the wealthy at parties.

All the while, Boretz successfully exploits the city’s abundant surfaces as she thoughtfully curates mesmerizing reflections on mirrors, vehicle windows, and glass. This multidimensional effect is captivating alongside the clever framing and stimulating textural components punctuating each image.

Finally, in Street there is a celebration of life, of diversity, of extraordinary among the commonplace during a time when people just lived. In her own words:

The streets were gritty and decaying a block away from ones that were polished and refined. The daily discrepancies ebbed and flowed throughout these 25 years. The dirt and graffiti came off the subway as with some of the streets, but much stayed the same, even the kind of camera used. People absorbed with one another, with gestures, with humor, with intimacy. A city of contradictions.

Eva Sturtz is an artist whose work has been exhibited in Philadelphia where she lives. She is also an alumni of Moore College of Art & Design.