On the Street of Divine Love: New and Selected Poems (Pitt Poetry Series) 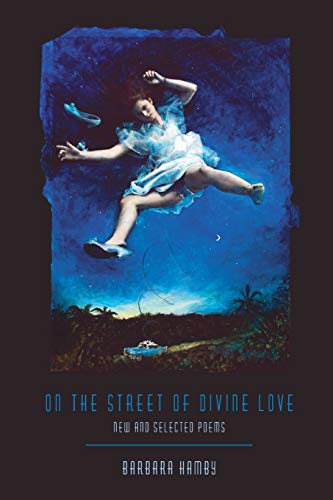 “Hamby’s work stands as an argument against those who claim that poetry is just plain dull. It’s hard to resist a whirl On the Street of Divine Love.”

Get ready for a wild ride when you dive into Barbara Hamby’s book On the Street of Divine Love: New and Selected Poems. You’ll soon be roaring down avenues of the alphabet with a poet who is dazzled by—and a master of—our lingo.

She could be talking about herself in “Ode to American English” with her line about “all the smart-talking, gum-snapping hard-girl dialogue . . .” Her long, listy lines crackle with wit and energy, sending these poems careening through contradictions and tonal switch-ups in a way that seems both completely outrageous and true to life.

This book of New and Selected contains terrific selections from her previous books: Bable, which won the AWP Donald Hall Prize, The Alphabet of Desire, which won the New York University Prize for Poetry, Delirium, which won the Vassar Miller Prize, the Kate Tufts Discovery Award, and the Poetry Society of America’s Norma Farber First Book Award, and All-Night Lingo Tango.

On the Street of Divine Love begins with new poems, and they grab one’s attention right away. The first poem is “Ode to Forgetting the Year.” Ms. Hamby’s perspective is never conventional, and that shows here, with her celebration of what one is happy to get rid of. The poem begins this way:

Forget the year, the parties where you drank too much,

said what you thought without thinking, danced so hard

you dislocated your hip, fainted in the kitchen,

looked you straight in the eye, blossomed like a bodhisattva,

lectured you on the Six Perfections while drunk people

with melting faces gathered around your shimmering corpse.

In typical Hamby style, she doesn’t just list the things she’d like to forget. She swerves back for a while to what she doesn’t want to forget, going into detail about spring and her garden, but there are some things in the garden she is comfortable letting go, namely the “disappointing row of corn . . . its stunted ears and brown oozing tips.” Soon she’s barreling off to discarding whole years, and that’s the way her poems go.

Many of Ms. Hamby’s new poems, as well as those from previous books, are odes. Every one of them celebrates language. Many of them embrace icons of pop culture. And while they are funny, smart, and smart-alecky, they often contain wistful moments.

Her poem “On the Street of Divine Love” embraces many disparate elements, but ends with the poignant image of “some ragged bird perched / on a palm tree, singing his heart out for everyone walking alone / through the alleys and fields of this broken night on Earth.”  One can’t help seeing parallels between what the bird does and what poets do.

The effervescent and all-encompassing nature of Ms. Hamby’s poems gives the reader a sense of discovery and vitality. Yet the writer’s characteristic style might also be perceived as a weakness. Her poem “My Translation” begins

I am translating the world into mockingbird, into blue jay

into cat-bombing avian obbligato, because I want

The poem goes on to include references to Abyssinians, Visigoths, Gutenberg, Apollo and Daphne, Mao Tse Tung, Madame Chiang, Betty Grable, Jane Russell, Betty and Veronica, Calliope’s stepdaughter, Odysseus, and, well, you get the idea. Experiencing the poem unreel can feel like a delightfully dizzying rollercoaster ride . . . or just an assault of “senseless tintinnabulation” and “squawk.”

Along with her husband, poet David Kirby, Ms. Hamby edited an anthology of poetry called Seriously Funny. It could surely be the title of a collection of her extravagant work, which is hilarious, and underneath it all, serious about translating the chaos and absurdity of life into something strange that nevertheless we readers recognize as true.

Ms. Hamby’s work stands as an argument against those who claim that poetry is just plain dull. It’s hard to resist a whirl On the Street of Divine Love.