Strangers in the Bronx: DiMaggio, Mantle, and the Changing of the Yankee Guard 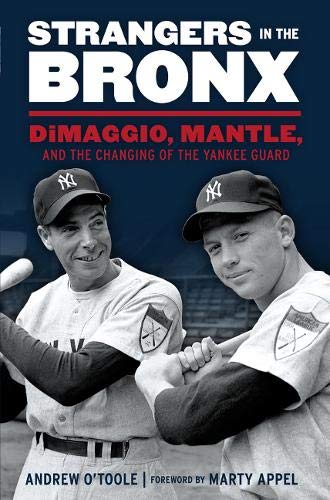 Baseball fans with an appreciation for those rare instances when the game produces an intersecting of the baseball careers of two teammates who become baseball immortals, will enjoy author Andrew O’Toole’s new book, Strangers in the Bronx: DiMaggio, Mantle, and the Changing of the Yankee Guard.

Set against the backdrop of the New York Yankees’ quest for a third straight World Series championship during the 1951 season, the author poignantly describes two men struggling through their own version of personal self-doubt. O’Toole’s book reveals that this particular baton-passing did not occur with a triumphant season-long spectacle showcasing Mantle’s rising star, it details a relatively benign and modest launch in Mantle’s initial year juxtaposed against the declining skills of the proud and aloof Joe DiMaggio.

At 36 years old, the Yankee and pop culture icon, DiMaggio, was wondering if he had one final good season in his deteriorating body while the 19-year-old Mantle, despite possessing an array of eye-popping skills, was questioning whether he even had a future in the game.

By its telling, the book reinforces one reason baseball remains such a fascinating sport for its fans, offering them an opportunity to look to the past to ponder the fact those witnessing the game at the time were not privy to the significance of the events rolling out before them.   When the 1951 season ended, few Yankee fans were predicting that DiMaggio was passing the torch of Yankee greatness to Mantle as Babe Ruth did to Lou Gehrig and Gehrig before that did to DiMaggio, those careers spanning nearly 40 years.

The book is also dotted with wonderful anecdotes about self-proclaimed baseball genius and Yankee rookie manager Casey Stengel, who is well-remembered for his circuitous thinking and strange syntax which often had visiting writers scratching their heads attempting to decipher his meaning.

True baseball fans will also enjoy learning about how players in the 1950s were part of the pre-game festivities by participating in events that would be unthinkable today, where players allowed themselves to be blindfolded so they could participate in a base path foot race pushing a wheelbarrow to win a small cash prize.

And while the book clearly shows the vast differences between those days and now, it also captures the steady nature of the game, describing in one story, Mantle heading to New York wearing a straw hat and carrying a $4 cardboard suitcase, while also highlighting a theme consistent with today’s world of major league baseball. Both then and now, rival teams bemoan the fact that the Yankees had and continue to have the resources to outbid other teams for proven talent to keep them in the championship hunt.

All these factors are lovingly combined by author O’Toole, drawing a picture of a professional sport that despite the run of years, at its core, the game and its all-time great players generate a consistent and comforting rhythm in the lives of the millions of baseball fans across the decades and eras.