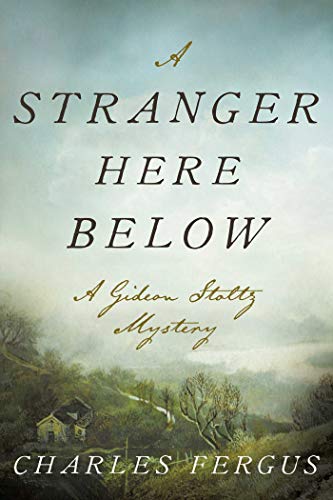 “A slow, rich novel of a distant time and a man who is ‘Othered’ in most aspects of his life.”

In A Stranger Here Below, Gideon Stoltz, a Pennsyvania Dutchman (that is, from German settler stock), has become sheriff almost by accident in the growing town of Adamant, in 1835. Though the town is already making its mark economically with an iron foundry and a range of wealth from ironmaster to thief, it’s only a hard day’s ride from frontier landscape and life. And some days, maybe not that far.

Through Gideon’s naive eyes, the layout of the town’s power structure begins to emerge. It’s based on force and violence as well as profit. And it has little of benefit for the women and children, whose voices mingle with old ways, as well as with the New World’s fresh forms of Christian worship. Gideon’s own marriage is a cross-cultural one, into a family of scoundrels and at least one sorcerous sort of grandmother. But it’s a heart’s truth marriage, and he clings to it as a series of deaths in the town slowly peel back the truth of two earlier deaths: murder for gain.

Underneath this, for Gideon, is the formative event of his young life: seeing his mother dead after an assault that’s never avenged. It haunts him even as he investigates crime for his town, and when he retreats to his much-loved wife to try to regain his footing, he stumbles into what he most fears: “I am thinking about how we are punished for loving,” he admits to her.

“‘We fall in love, with life, with other people, with our kin. We love the land, and galloping on a horse, or singing hymns, or watching the clouds pile up in the sky, we love our dear wives and children . . . We love these things so much,’ he said, ‘that we can’t bear to think of being parted from them. When we see others torn away from life, by disease, or confusion of the mind, or the cruel actions of others . . .’ He stopped, could not go on.”

His wife, named True, assures him that this pain requires belief in God’s plan and promises. She enquires about what’s upsetting him: the death of his friend the judge, who committed suicide, or a murdered boy he’s seen?

“‘Both.’ And his memmi. Always his memmi. He saw for the thousandth time her ravaged body lying in its own blood.”

Fergus’s first mystery follows more than a dozen books, including many explorations of the natural world. In this rural sheriff’s embrace of the world around him are the goodness and love that won’t allow a wrongful death to be covered up—and that in turn will disturb what peace he’s gained, at the deepest levels.

A slow, rich novel of a distant time and a man who is “Othered” in most aspects of his life, A Stranger Here Below is also an exploration of how a kind person can be drawn toward the dark revelations that crime solving demands. For some, the book may be a bit too tender in places, yet this patina of affection can readily be crushed and scarred—as the sheriff’s investigation reveals.

Although the book is clearly crime fiction, it is equally an exploration of the soul in the presence of death and wrongdoing. Which is, after all, what a “stranger here below” can expect.