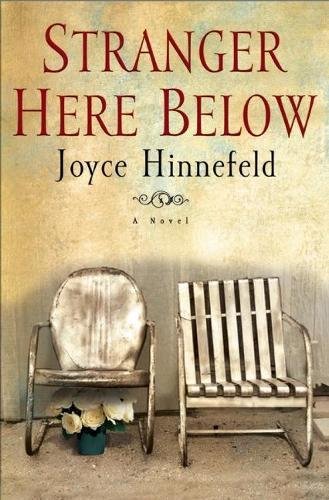 Joyce Hinnefeld’s outstanding novel, Stranger Here Below, centers around the lives of two young women, Maze, a white girl from Appalachia and her black roommate at Berea College, Mary Elizabeth.

The novel opens with a letter from Maze to Mary Elizabeth: “There’s one thing I do want you to know, and that’s our twins’ names, Pilgrim and Stranger. . . . They are named for you and me, for the way I remember us when we first knew each other at Berea, the way we felt when we climbed those green hills and sang those old hymns at the top of our lungs.” The seemingly folksy opening and gal-pal plot might lead one to assume that this novel is a predictable, sentimental example of “chick lit.” Instead, Stranger Here Below, is a beautifully written and developed, multifaceted, and sophisticated work about relationships between women, and race, and class.

Not only does this well-researched novel trace the friendship of Maze and Mary Elizabeth from 1961 to 1968, but it also examines the lives of their mothers and other relatives, and an influential friend, Georginea Ward, who is the sole surviving Shaker in Pleasant Hill, the community where Maze and her mother live for some time. Hinnefeld deftly captures various time periods spanning from 1872 to 1968 and settings including different parts of Kentucky, Chicago, and New York.

Stranger Here Below is beautifully written and organized. The third-person narrator’s voice stems from an oral tradition of storytelling, which engages the reader and aptly reflects the characters and environment of the novel.

The narrator describes Maze’s great grandmother: “But still, Mamaw Marthie maintained, leaving that peaceful holler in a bend of the mountains never left a body better off, as far as she could see. And Vista held on to that notion, at least for a time.”

The language subtly reflects an Appalachian folk dialect without actually imitating it; it successfully captures a certain tone or feeling without lapsing into cliché. Also, throughout the different sections of the novel, the narrator takes on the perspective of the particular character being described.

For instance, in a section about Mary Elizabeth, the narrator says, “The concert was fine. Hadn’t it been fine? Everyone said so. Everyone was smiling afterward, drinking their punch and nibbling on cookies and smiling at her—the president and his wife. . . . Her father stood in a corner and beamed, one eye always on her mother, held together somehow, maybe with glue.” In this scene, the narrator’s alliance with Mary Elizabeth enables the reader to see Mary Elizabeth’s own anxieties about her performance and her fragile mother and consequently fashions her into a more empathetic and fully-realized character.

The complex structure of Hinnefeld’s novel also makes the narrative particularly compelling. The novel moves back and forth in time and place and among the different characters. The story is not told chronologically, lending it the air of a mystery or puzzle, which Hinnefeld adroitly fits together. The conclusion of the novel impressively unites the various themes and characters that she develops throughout the book.

The psychologically complex characters of Stranger Here Below help to illustrate many of the novel’s themes without merely functioning as stand-ins for ideas or agendas. Mary Elizabeth is not simply a token African American character who has experienced racism, and Maze is not just the child of a single mother from Appalachia. Instead, Hinnefeld examines the effects and complexities of racism and social class and the traumas caused by racism in a nuanced and thoughtful way.

Hinnefeld also depicts how religious repression, sexuality, race, and social class intersect. In many ways, the character Georginea exemplifies many of these issues and links many of the other characters together. In the late 1800s while a student at Oberlin College, the white Georginea falls in love with a black man. Her father forbids her to marry him and removes her from Oberlin to become a teacher in Kentucky. After failing to fit in with the strictures of her society and suffering, Georginea finally joins the society of Shakers and finds release from what has oppressed her.

Stranger Here Below is an impressively constructed, graceful, intelligent work. Like her character Maze, a talented weaver, Hinnefeld adroitly intertwines colorful, multi-layered, rich threads or stories to create a beautiful tapestry of a novel.