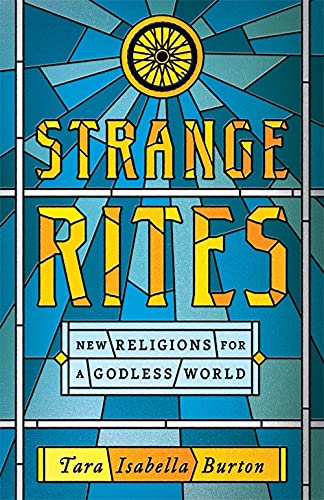 “. . . today’s Americans are embracing a kaleidoscopic panoply of spiritual traditions, rituals, and subcultures from astrology and witchcraft to SoulCycle and the alt-right.”

In her new book, Strange Rites: New Religions for a Godless World, Tara Isabella Burton writes, “[T]he story of the American religious landscape has always been a story of the battle for the American soul: waged between the forces of institutional religion . . . and crazes for its intuitional rivals . . .”

The title of this book is misleading as it has little, if anything, to do with sacred rites—at least not as most people envision them. And mainstream religious tradition is not the focus of this book, in fact, it is the antithesis because “the old institutional religions are in decline.”

This is also not a book for the faint of heart. The discussion ranges from the usual suspects, witchcraft and yoga, to the less so: SoulCycle and CrossFit. The author leads the reader onto a darker and less obvious path that presents the argument for, and against, a secular, civil religion. This is where “god,” in any form, is absent and replaced by individual values and beliefs. It falls within the concept that the “idea that religion should be personal, not social, is encoded in our nation’s DNA.”

In fact, it is when the author leaves the traditional sects and the old-line outliers that the book really takes off.

Social justice culturists, techno-utopians, and the alt-right are all coming into the game with their own brand of nontheistic civil religions. These movements are incompatible with each other, and, especially with the authoritarian and reactionary alt-right segment, coexistence and tolerance are unlikely.

What comes across in reading Burton’s book is that, nontraditional and secular notwithstanding, these emerging civil religions are no different from what currently exists. Each believes their way is the only way and any who disagree or digress from the teachings each professes is an “enemy” to be dealt with mercilessly. There is no room for dissent or separate opinions. The “teachings” of each of these belief systems are designed by a few to be imposed on the many. And, that reflects the way of traditional religions: my “god” is better than your “god.”

There is a growing percentage of Americans who, when it comes to religion, identify as “Nones.” They do not belong to any organized religious sect. According to Burton, a broader category are “those who aren’t rejecting religion, but rather remixing it.” She refers to those people as The Remixed. They “hunger for the same thing . . . a sense of meaning in the world and personal purpose within that meaning . . .”

Burton proposes that The Remixed have two options at the moment: one is within the social justice culture, the other is “the no-less-utopian culture of Silicon Valley.” The latter is where the “Rationalists and Transhumanists and proponents of the Californian Ideology” exist in their own version of the perfect world.

The social justice culture envisions a utopian, progressive existence where the personal and the individual reigns supreme. The Silicon Valley techno-utopians cater to idea that technology is the only thing that counts. Biology is overrated, and tech skills will set everyone free.

All of that sounds idyllic, but keep on reading the book. Because, as it is with every religion known to humankind, there is an underbelly at play that undermines the all-inclusive promise of the promoters.

The social justice culturists are organically suspicious of white male privilege. The techno-utopians appear to base everything on the irrefutable fact that white males are, in fact, supreme and deserve to be privileged.

Under social justice, all civil and government institutions are suspect and must be dissolved; the replacement will, it seems, evolve from the goodness of people and their beliefs. Self-rule is the goal because government is bad, and any alternative is better. They seek a “liberated world” where all are equal, except as in Animal Farm, some animals are more equal than others.

But let us not forget the techno-utopians because they “envision the telos of the universe as optimization.” It’s Bezos, Zuckerberg, Musk, et.al. controlling everything and everyone because they know what is best and, after all, they are smarter than everyone else. This group is more libertarian than liberal and see no reason for any authority to exercise control over them. Ultimately, the techno-utopians “dream of a world in which we are all rendered optimally efficient machines.”

Remember, the book is not over yet, because there is still the chapter on an alt-right religion, or “modern atavists,” that longs for a return to “traditionalism, authoritarianism, and established gender roles.” That’s right, women of the world, prepare to return to the kitchen . . . leave your shoes at the door. This is the group that “find spiritual and moral meaning in primal, masculine . . . images of heroic warriors of ages past.” These guys keep showing up on social media dressed in camouflage and bristling with weaponry. This particular group comes across, in Burton’s book, as a bunch of guys who are unhappy that other people exist, and no one is paying attention to them the way they want anymore. Violence against everyone they hate is their goal. And, that’s part of their religion.

Reading this book at this time requires one to consider it from a different perspective. Evangelical churches are chomping at the bit about “religious persecution” and violations of their first amendment rights. The U.S. Supreme Court cites that the “strongly held religious and moral beliefs” of individuals and corporations must be considered before laws can be enforced. How will these considerations play out for civil religions when the social justice culturists, techno-utopians, and modern atavists begin to demand that their “strongly held religious and moral beliefs” are entitled to the same deference?

“Only time will tell which one will win.”