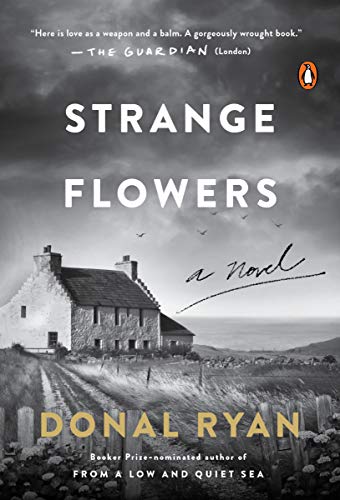 “A poignant, masterfully controlled story of love and loss and redemption, Strange Flowers by Donal Ryan is a gorgeous, meditative treatise written in soul-deep, extraordinary language.”

In Donal Ryan’s quietly moving, Strange Flowers, the multigenerational story is so deeply rooted in rural Ireland as to epitomize the idea of character as place. It’s a heart-tugging, family saga with a central focus: the parish of Knockagowny, Tipperary, where a working-class couple’s only daughter, Moll, has packed her valise and disappeared without leaving a trace.

Paddy and Kit Gladney live in a tidy, small cottage with “a green and yielding world around them in every direction.” Paddy, the local postman and decades-long caretaker of the wealthy Jackman’s farm, and Kit, a bookkeeper, are simple people of devout faith. They remain stoic in the face of their unexplained tragedy. “In the years that followed Moll’s departure on the Nenagh bus, and the Dublin train, Paddy and Kit Gladney lived a solemn half-life of work and prayers and weakening hope, and the earth spun, and the moon phased, and the rain fell, and the sun shone, and their hearts grew heavier and heavier with grief.”

Until one day, five long years later, Moll reappears. Paddy and Kit “were reverent in those first minutes and hours, filled with supernatural awe at this miracle, not quite believing yet that she was real.”

In perfectly measured, lyrical long sentences, Irish traditions and social mores serve as both backdrop and interpreter as Strange Flowers unfolds. The local community is tightly knit, the neighbors sensitive to and solicitous of the Gladney’s plight, and when Father Coyne and Sergeant Crossley appear in the boreen and unlatch the Gladneys’, gate, Paddy suspects they bring no good news concerning what the changed Moll is guarding, with respect to her recent past.

With delicate hesitancy, Sergeant Crossley imparts the news that a young black man from London is in the next parish asking after the Gladney’s location, hoping to locate his missing wife, Moll. Paddy sets out to investigate, while he weighs the situation. “And yet she was back, and she was whole and, yes, she was holding her secrets fast to herself but that didn’t matter. And now it seemed a story had arrived under its own steam from England, in the shape of a gently spoken black man from the land of the old enemy, and there was a strange rightness about his queer situation, of inevitability, of fate’s ineluctable will being done.” On the road to Nenagh, Paddy contemplates the turn of events. “He wondered at how life could be a certain way one minute and a different way altogether the next with no effort at all from the person whose life it was.”

Alexander Elmwood meets Moll in London during her missing years and remains devoted throughout their unorthodox marriage, though Moll’s love for him is cool and distant. From a loving, religious family that embraces Moll before she disappears from London, Alexander has a child with Moll named Joshua, with black hair and eyes and skin that’s lily white.

When Alexander finds Moll and settles in to Knockagowny, he is willing to weather her aloof nature. He braves being a novelty in Knockagowny. “His blackness here was as remarkable as his son’s whiteness had been in Nottinghill, and all the pain of difference now was his and this was how it had to be.”

When Moll begins to confess her missing years to her mother, “Kit had an idea that some truth was close to being told, something revealed about her daughter that might lead eventually through its revelation to redemption though redemption for what misdoings Kit could not tell.” Moll says to her mother, “I never felt right inside, Mam. From the time I was ten or eleven. There was something wrong with me.”

Lucas and Ellen Jackman are wealthy landowners whose relationship with the Gladneys crosses class lines. The Gladneys live in the Jackman’s caretaker’s cottage, and their lives are enmeshed to include multiple generations. When Ellen Jackman appears at the Gladney’s cottage at the news of Moll Gladney’s return to Knockagowny, Moll breaks protocol and uncharacteristically rages at Ellen. Kit and Paddy witness the scene and Paddy worries. “He knew, somehow, and so did his wife, by some perfect and unexplainable force of love, that something was wrong with their daughter, inside her, that she was whole now but only just, and that she was in terrible, terrible trouble.”

Strange Flowers is layered with hidden motivational secrets that culminate in the confusion of Moll and Alexander’s son, Joshua, who flees his Knockagowny home as a grieving and disillusioned teen, and goes to London, where he falls in love with Honey Bartlett, a young woman uncannily tied to more secrets that circle back to his parents and lead Joshua back home.

A poignant, masterfully controlled story of love and loss and redemption, Strange Flowers by Donal Ryan is a gorgeous, meditative treatise written in soul-deep, extraordinary language.