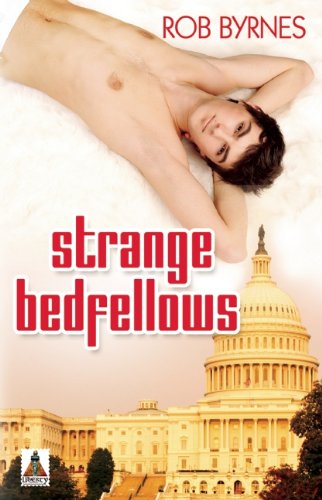 “Never screw with LGBT criminals; they’ll get you back in spades.”

“. . . the perfect antidote to life’s everyday complications, a light and lively read for to that much-needed mental vacation you cannot otherwise afford. “

Two criminals, who happen to be gay, are approached by a third, whose sexual orientation is not immediately known but should be gay, who wants them to plan and conduct a series of burglaries concerning a United States congressional candidate, who is definitely not gay, in order to retrieve pictures which never should have been sent from his cell phone. The initial burglaries are somewhat successful, with the exception of the destruction of silk boxer shorts, but the capers go downhill from there.

Rob Byrnes’ Strange Bedfellows provides his readers with a somewhat quirky crime mystery that could have survived without the gay community being involved. Or at least the reader will think so until they reach the “revenge” chapters. Even then “gay” takes on a whole different meaning.

A couple of chapters in, one wonders: Is this book meant to be a comedy? By the third chapter it is definitely the leaning was more toward the side of humor but not comedy.

The story reads like a ménage à trois with Anthony Weiner + Watergate + the world of LGBT criminals. That by itself is funny—and it becomes what carries the story. For political junkies, Strange Bedfellows is rife with references to political types and pundits.

Chase LaMarca, the brains, and Grant Lambert, the technophobe, are the two somewhat bumbling criminal-heroes who specialize in anything that will make them money, as well as partners in crime and bed for 20-years. They are a bit reminiscent of Harry Lime (Joe Pesci) and Marv Merchants (Daniel Stern) of the Home Alone franchise. Not quite as bumbling perhaps, and only a little smarter, but tend to get into some interesting situations along the way.

The crime broker is Jamie Brock, who is not to be trusted, but convinces Chase and Grant to accept the grand heist. No one else in the story trusts Jamie.

The crime concerns the recovery of a nude picture of our political candidate, Austin Peebles, sent to an acquaintance, female of course. Peeble is the son and son-in-law of two active but older members of Congress, and heir apparent to his mother-in-law’s congressional seat. He is also too immature and too “adorable” for his own good.

His wife of two years, Penelope, is a firecracker, owner of a very successful brokerage house while using her political connections trolling for new clients, is the master of the marriage, and the one with the real influence second only to her mother, Triple-C.

Peeble’s mother-in-law and Penelope’s mother is Rep. Catherine C. Concannon, aka “Triple-C,” and it is her legacy that Austin Peebles will, hopefully, continue.

Kevin Wunder, Austin’s campaign manager, Triple-C’s chief of staff, and wanna be congressman, is the person doing the hiring of the second-story men for the recovery at Triple C’s demand.

Finally, there is Hillary Morris, aka June Fourteene in honor of Flag Day, a mean-spirited and successful conservative blogger who makes Ann Coulter, on her worse days, seem like a Girl Scout. She is the one with Peeble’s sexted picture and treating to expose the exposure if he continues in the congressional race, thus killing any chance of another liberal getting into Congress.

Grant and Chase are hired to steel Fourteene’s computers and smart phone in order to retrieve the photo not yet published. The plot came off with a few problems, including the ripped boxer shorts.

The problem was that Fourteene posted a portion of the picture—the penis of course—on her blog site the day after the burglary.

Because of this posting, Grant and Chase are not paid the $30,000 owed to them by the Peeble campaign. The reason is simple: They did not retrieve all of the pictures of Austin’s full Monty pose, and Penelope, the campaign’s treasurer, did not pay them. Grant and Chase believe they were ripped off.

Revenge is in the air and the chips start to fall into their predictable places.

The lesson? Never screw with LGBT criminals; they’ll get you back in spades. Or hearts, according to the plot line.

It may take a while to get used to Mr. Byrnes’ style and the wackadoodle overtones of the story. Not that the characters are confusing, but the direction of the story and who the actual players of note are.

In this tale everyone is either gay, wannabe gay, conservative, or politically inclined—or some oddball combination thereof. The world of gay criminals—which seems to be the same as straight criminals—in Strange Bedfellows is highly readable and quite a bit of fun. The capers are a complicated and convoluted which just contributes to the circuslike atmosphere.

Yet what Strange Bedfellows lacks is an imaginative storyline. By the end of the first third of the book, the reader knows where the story is going, who the double-crosser(s) are, and where the characters will end up.

Dr. Michael Shermer, author and Executive Director of the Skeptics Society, talks about conspiracies in his books, contending that they need to be simple and involve as few people as possible. Best guess says that Mr. Byrnes has never read Shermer.

Strange Bedfellows is the perfect antidote to life’s everyday complications, a light and lively read for to that much-needed mental vacation you cannot otherwise afford.