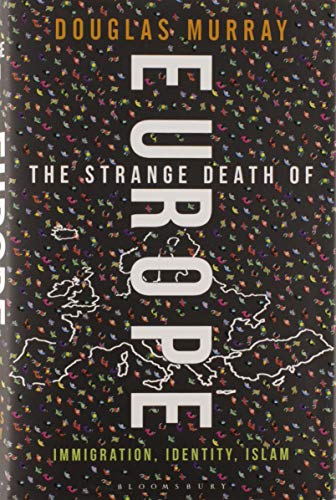 “The Strange Death of Europe may be one of the most important philosophical books of our time.”

European politicians like London Mayor Sadiq Khan and French President Emmanuel Macron have insisted that terrorism is a “part and parcel” of life in Western Europe’s cities. They tend to throw up their hands and claim that there is only so much that they can do about increasing immigration from the Muslim world and the resulting uptick in terrorism. Increasingly, the publics that they serve are not buying it.

Douglas Murray’s The Strange Death of Europe may be one of the most important philosophical books of our time. Douglas Murray, who is an Associate Editor for the center-right publication the Spectator, warns Europe’s shockingly blasé elites that they are sitting on a volcano. On the one hand, thanks to suicidal immigration policies and a refusal to integrate Muslim migrants from the Middle East, North Africa, and sub-Saharan Africa, Europe may no longer be European within our lifetimes.

Second of all, because our media and our politicians refuse to talk honestly about the problem with Islam, each new terror attack or sex scandal (see: “grooming” in Rotherham and Rochdale, the Cologne attacks, and Sweden’s rape statistics) pushes an otherwise centrist public further and further to the right. Unless the center-left, which controls European media, its universities, and its art establishment, stops labeling all their opponents as “Nazis” or “fascists,” then real-life fascists may find popular support, for they are the only ones advocating for options that could actually keep Europeans safe and their cultures intact.

This is nothing less than a dynamite book. It is likely that liberals in Europe and North America will avoid this book, but they shouldn’t. Murray’s questions are too important to ignore anymore.

For example, why is it that every people, from the Chinese to the citizens of Malawi, have the right to a homeland? Furthermore, why are Western Europeans denied this right? Its seems that the political consensus is that Western Europe has to be an international zone, but no one has yet given a believable explanation for why this should be. For decades, opinion polls have consistently shown that the people who have not been consulted at all (native-born Europeans) are strongly in favor of keeping their cities European and free of Muslim culture and religious laws.

Murray correctly understands that the disconnect between the European public and their leaders cannot last. Thanks to the Internet, French, British, Swedish, and German citizens can see that Eastern Europe does not have the same problems as they do. Why? Because Eastern Europeans have strict immigration policies and microscopic Muslim populations.

When it comes to the scared cows of immigration, The Strange Death of Europe dismantles them all. Immigrants in Europe do not make their home countries richer (most immigrants wind up on social services), they do not make their home countries safer, and they do not present “cultural enrichment” to many of their native neighbors. In short, Murray says that multiculturalism has failed and can only be defended by shallow and cynical applause for new ethnic cuisine.

Unlike other polemics, this book is well researched and often muted in its criticisms. As someone who has visited migration camps in Greece and in Italy, Murray knows that some really do need asylum. However, he also knows that even asylum seekers have been a net negative for European populations. After all, Sweden is still home to theoretically temporary Bosnian asylum seekers who commit crimes at a higher rate than native Swedes.

The Strange Death of Europe sounds more than just a few alarm bells. If nothing else, this book eviscerates the idea of “Keeping Calm and Carry On.” Things have to change, and that means that Europe’s outlook on life, philosophy, happiness, art, and architecture all must change as well.