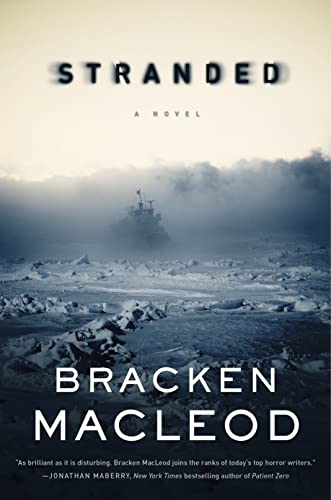 “one of the most engrossing, readable, page-turners of 2016.”

Bracken MacLeod’s debut novel Stranded feels like the love-child of Fringe and John Carpenter’s The Thing, dressed in psychological horror clothes that make it unique from either and a standout in its own right. The story is an homage to Carpenter’s film with a weird horror twist and is by far one of the most entertaining and readable novels of 2016.

Stranded is the tale of Noah Cabot and the crew of the Arctic Promise. Heavily battered by a storm, the ship sails blindly into thickening fog that has also disabled their navigation and communication equipment. Unable to repair equipment that isn't broken and with limited fuel and food, they find themselves beset in impossibly thick ice and trapped with no way to call for aid.

In addition to becoming stranded on the ice, most of the crew experiences a strange sickness that seems to leave Noah Cabot unaffected, which only serves to strengthen the crew’s distrust of Noah and heighten tension. As the crew becomes more ill and an attempt to free the ship from the ice proves unsuccessful, Noah and a handful of crew decide to investigate a mysterious shape an unknown distance away from the ship for supplies. The only way it can be reached is on foot in subzero temperatures.

What makes novels like Stranded and film like The Thing so powerful is the mounting anxiety from the brutal conditions that make something as mundane as stepping outside or losing a glove a life or death situation. The plot can go from routine to dire with one complication, which keeps the tension like a tightrope. Combined with the toxic dynamic between characters and fragile alliances among the crew, the layered conflict creates the most engrossing, emotional engaging plot possible.

In addition to strong plot, Noah Cabot is a fully fleshed out character that the reader cares about immediately. His situation is unique among the crew in that he has few allies and more than a few enemies, primary among them his father-in-law who is captain of the boat. The reader is engaged with Noah from the start. Without reader engagement with his character, the novel would still be interesting, but the emotional investment takes it to the next level.

Noah is not the perfect “hero” archetype.  His inexperience at sea and lack of discernment on how to navigate politics aboard the ship make him frustrating and a bit annoying; however, his love for his wife and child, loyalty to his friends, and ability to make quick, intelligent, decisions create love for his character and the reader desires for him to survive and make it home.

A strange discovery on the ice propels the novel through the second act. There is a definite tone shift as any perceived genre tropes are blown out of the water in favor of an ambiguous supernatural threat as antagonist. Readers who come into the novel outright expecting the events to be defined by science or religion might be disappointed.

Stranded is definitely a novel that is best enjoyed when readers come in with no preconceived notions or strong opinions about genre. Those looking for either a straight thriller or a hard science approach to events might find themselves exasperated. Go in with an open mind and just enjoy the ride.

Bracken MacLeod has created a very satisfying web of tension and conflict that makes Stranded one of the most engrossing, readable, page-turners of 2016.