The Story of My Tits 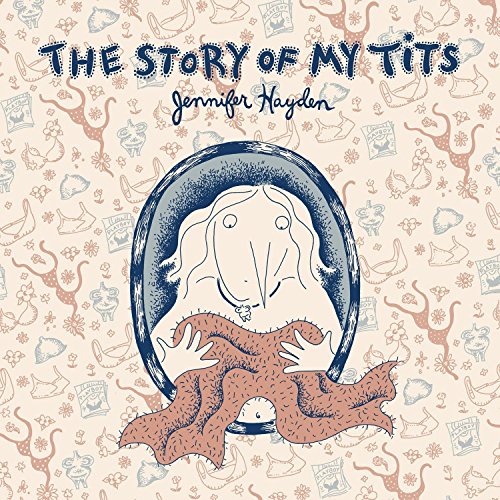 Jennifer Hayden’s first graphic memoir is the powerful story of the story of her tits—from their conspicuous absence in her early teens that leads her to stuff her bikini top with rocks to their eventual arrival and then loss through cancer. This is more than a cancer memoir, it is a finely-crafted, sometimes neurotic, coming-of-age tale—even if it is Hayden finding her own way through relationships, love, social structures, health concerns, and more into her 40s.

Starting with Hayden’s childhood and her growing concern over her flat-chestedness and her comparison to her father’s Playboy magazines to her awkward entry into bra-dom where she arrives at the Bloomingdale counter and opens her coat like a flasher to the saleswoman who brings her a double-A bra, Hayden regales us with the humor and pain of her pubescent years. Part of the pain is her watching, admiring, and envying the females around her who are growing breasts or already have them—from her classmates to her sister and even her mother.

Hayden discovers other ways to feel older than she looks—pot, cigarettes, and drinking—all with various disastrous consequences. But with her new, albeit small, bras, Hayden feels her sexuality blossom and the boys take note. Soon she has a bra to be felt up under and boyfriends to make out with.

By the time college comes around, Hayden has made friends with her barely-there breasts and so have many boys. She falls in and out of love as well as in and out of bed until she meets her current husband in college. About the time they get together she goes from barely-there to very-there and suddenly her entire wardrobe needs to shift—she has breasts, hips, and a belly. Meanwhile, her mother is going through her own breast journey—cancer—without sharing it with Hayden until after college graduation.

As Hayden navigates adulthood with Jim, she watches the ebb and flow of her parents’ relationship as they drift apart and her father begins an affair. Jim postpones proposing because they are still living in his parents’ house. As their lives begin to intertwine, more cancer arrives, this time at Alice’s (Jim’s mother) door in the form of lung cancer. She refuses treatment and keeps the pain at bay, while Hayden and Jim move up their wedding date so Alice can be there.

Hayden and Jim’s relationship is illustrated in all its teeth and claws, quite literally at times, and yet they remain strong friends and supporters through illnesses and fears—even through the deaths of parents. The friendship is there when it becomes Hayden’s turn to face breast cancer, and she gets a bilateral mastectomy—the breasts she had longed for as a pre-teen are taken swiftly and easily away at 43.

This comic memoir is an ode to breasts, to life, and to relationships. Fans of Alison Bechdel and Craig Thompson’s Blankets will want to read Jennifer Hayden’s Story of My Tits as will anyone who has ever felt the yearning for a more bountiful bosom or its sudden loss. Each chapter is punningly title: No Tits, Sick Tits, Tender Tits, Tits on Film, etc.

Hayden captures the many ranges of emotion throughout this memoir with complete clarity and infuses the seriousness with lighthearted imagery, gags, and metaphors. The book has a consistent four-panel layout on each page with black and white illustrations that cleanly provide depth moreso than color ever could in this heart(or breast-)felt memoir.