The Stonewall Riots: A Documentary History 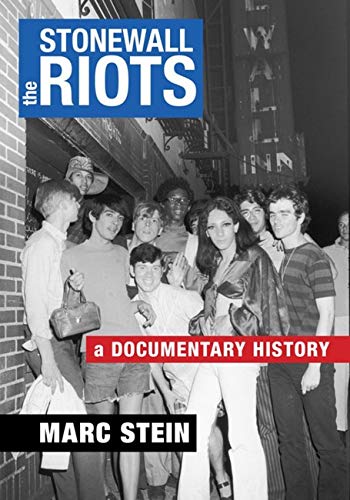 LGBTQ communities in the US are gearing up for June gay pride parades, and this year will also commemorate the 50th anniversary of the Stonewall Inn riots that continue to symbolize the coming out of a visible of a national LGBTQ civil rights movement in America.

LGBTQ historian Marc Stein’s new study The Stonewall Riots: A Documentary History examines how the events happened, what lead up to them, and if the riots were, indeed, the single historical flashpoint that caused a social revolution. There are so many myths about the Stonewall Riots and Stein goes a long way of sorting them out, separating fact from fiction and the Stonewall war stories from verifiable facts.

One of Stein’s central themes is his analysis (Interpretive Frameworks: “Who’s Riots”) that recognizes “justifiable concerns about class, gender, and race politics of questioning some sources than others. In these contexts, it is challenging to avoid both minimization and exaggeration.”

Stein also redresses the often ignored group of the most fearless transgender protesters, street queens, homeless hustlers, those who had always been visible outcasts, and the first to fight back against police brutality.

Stein meticulously establishes primary sources, corroborating facts, and pieces together a lot of fragmented data to write an on the record account of what happened on those six nights of gay resistance, what it meant then, and just as important, what it represents now.

Stein brings an insightful overview of gay activism in the ’60s as a prologue to the events around Stonewall and the impact of the national gay liberation movement in the years after. Stein chronicles the routine bar and bathhouse shakedowns, the public harassment, the personal threat,s and the strategies of gay activists who persisted despite every setback and personal risk.

The straight press cast the riots as the result of hysterical queens throwing a collective hissy fit because they were upset over the death of Judy Garland. Never mind that the gay people would be angry that they were routinely thrown in jail for having drinks in a bar that the police were already being paid off by the mafia to run. that they would be upset at losing their jobs because their names and pictures were printed in the newspapers because of said raids. The fact was that being openly homosexual, or transgender, congregating in a public place, being in drag, was at any given time a criminal offense in New York City. Meanwhile, gay bashing and murders of gay men, lesbians, and transgender citizens were routinely dismissed by police departments all across the US.

The book chonicles dozens of moving testimonials archived by Stein that would have otherwise stayed buried in academic studies.

Stein’s bibliography of what was reported in the Village Voice and underground gay publications is, in itself, an invaluable study of a gay America under attack and decidedly not covered by the leading newspapers, magazines, or broadcast journalist. There was a pervasive antigay bias of a blatantly homophobic straight press, including The New York Times, Time magazine, and most of the broadcast news of the era.

Stein analyzes the community’s internal struggles, failures and blunders after Stonewall and includes such important text as Del Martin’s open letter to the male dominated hierarchy. Martin and her lover Phyllis Lyon had been a fearless feminist couple and among other things founded Daughters of Bilitis (DOB) in San Francisco in 1955, the first national lesbian organization. Martin threw down the gauntlet in her moving polemic “If That’s All There Is?” with her truth that spoke to millions of lesbians. She mocked the tag line of “Gay Is Good” with an exit line: “but not good enough—so long as it is limited to white males only.”

A comprehensive public record for LGBTQ Americans couldn’t come along at a more politically perilous time as incidents of gay hate crimes are way up, especially regarding transgender Americans. Antigay bills that would allow discrimination against gays under the guise of “religious liberty” are being financed and advanced by this current administration, antigay churches, and hate groups.

It is not a criticism to mention that Stein’s exhaustive methodology may not be for general readers as he collates all the forensic, raw data to explore the events and impact of the riots from every angle.

And, indeed, forgotten heroes of the movement speak loudly on these pages. Consider Philadelphia based activist Kiyoshi Kuromiya (later, a national AIDS activist in the ’80s) writing in the Philadelphia Free Press about the first Gay Pride Parade in New York in 1970 on the first anniversary of Stonewall: “We came battle-scarred and angry to topple your sexist, racist, hateful society. We came to challenge the incredible hypocrisy . . . of your oppressive sexual role-playing.” Now, five decades later, those words resonate more than ever as a potent reminder for LGBTQ citizens that it could be time to hit the streets again to fight the latest iteration of tyranny in America.