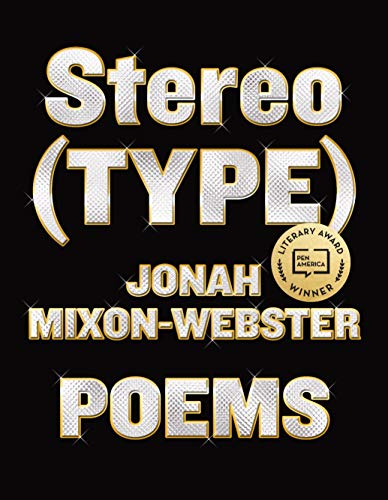 Stereo (TYPE) is performance poetry overflowing with the N-word, compelling the readers to reckon with the hurtfulness that African Americans endure “for all eternity and shit.”

By contrast, performance poetry is multi-dimensional, spontaneous, even unruly. Performance poetry is essentially oral storytelling, an ancient art deeply rooted in human history, much more so than traditional poetry. The human voice, the physiological ability to utter sounds, in which the poet delivers the poem, adds pitch and tone to the words, expressing rage, anger, ecstasy, calm, and a range of other robust and delicate emotions. Voice overpowers the poetic strucutre, though not wholly. For sure, performance poetry lifts the words far beyond their denotative and connotative meaning.

Drawing attention to how politicians use the Flint Water Crisis to score points, Mixon-Webster informs the readers that President Barack Obama first came to Flint in 2016, “took one sip of clear water, and left, only to return to the city in 2020 to campaign for Joe Biden and to shoot a three-pointer from long range.”

In 2016, the State of Michigan facing the Flint Water Crisis published Frequently Asked Questions. “Can I use tap water to brush my teeth? No. Do not use tap water to brush your teeth. Use . . .” . . . “Will the water contaminated with lead hurt me or my children? Lead exposure can affect nearly every system in the body. It may not. . .” . . . “What if I have already consumed potentially contaminated water? Even if someone . . . Anyone experiencing symptoms, such as diarrhea, nausea . . . should contact their healthcare provider . . .”

Mixon-Webster is aware of the reality, and he expounds it straight on that the N-word, no matter how it is spelled in print or vocalized in speech, has permeated the language. Jonah is also aware of the reality that the N-word has metastasized in the culture. Every few years, the N-word spawns new variants, some in the form of word alternatives, such as thugs. The word is rarely mute. It is viral. Some speakers whisper the word under face shields, some under masks covering mouths and noses, some blatantly in street encounters.

The poem, “Black Existentialism No 8: Ad Infinitum; or, Ad Nauseam,” consists of just one word, “NIGGAS,” with SSS sprawling over numberless pages, some intertwined, some filling an entire page, some leaping off the print perimeters, some structured like a portrait.

The poem, “Black Existentialism No 12: Da’ Bad Nigga Blues,” consisting of 12 lines, uses the word “nigga” 26 times. “I wuz bad at bein’ a nigga even tho’ I wuz a real nigga, or a bad nigga, or a bitch nigga, or a fag nigga, which I always wuz.” The repetition calls attention to the existential reality of living as a Black person in a race-wretched milieu. The N-word fills the air with its ceaseless clatter: wherever you go, whoever you see, whatever you do or do not do, the being of a Black person breathes air polluted with prejudice. It is not just the water.

Mixon-Webster” poetry is by no means limited to protest poetry about the plight of an oppressed community. Mixon-Webster strikes deeper at the roots of oppression by ridiculing highly acclaimed assumptions of suffering, such as the Greek myth of Sisyphus. The myth of Sisyphus disempowers humans by creating cyclical tyranny from which there is no escape, like rolling a boulder up the hill only to see it roll down. African Americans cannot accept any such mythic suffering as their destiny, as per Jonah.

Offering liberation from recurrent repression, Mixon-Webster creates The Myth of Niggaphus. The Greek gods force Niggaphus because “the nigga won damn near every event in the first few Olympic games” to roll a big ass watermelon up a hill “for all eternity and shit.” “But Niggaphus was no punk nigga.” He outsmarts “them triflin’ ass gods” by devouring the big ass watermelon “cuz the nigga was hungry.” To humiliate the gods, even more, Niggaphus “demands entry . . . to Mt. Olympus.” There, Niggaphus disgorges the chunks of watermelon, blood, seeds all over the temple, forcing Zeus to summon “a tetramorph to lick the temple clean.” The next time, the dishonored gods use a rock.

One challenge of performance poetry for the readers is to read the poems aloud, as the poet would, to experience the range of emotions that the words carry. Some readers may lack the will or ability to act out the poems on a personal level. Stereo(TYPE) furnishes some guidance, using differing fonts, capitalization, and the readers may use these cues to perform the poems. Mixon-Webster has recited some of these poems on YouTube, and the readers may watch these videos to savor the reading of performance poetry. Perhaps, an audiobook of these poems is available. If not, Mixon-Webster must recite these poems in his voice.

Jonah Mixon-Webster is a young poet, and Stereo (TYPE) is his debut collection. Hopefully, he will continue to write iconoclastic poems to judder the prejudice against African Americans and other vulnerable communities.