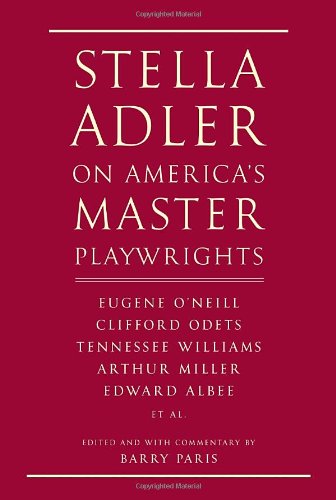 “. . . would that this book find a larger audience. Would that it were more universally read.” Although the lectures contained herein were given when Carter and Reagan were in the White House, the information in Stella Adler on America’s Master Playwrights today seems completely on target and remarkably fresh:

“The social playwrights, from Ibsen on, make it clear that society’s ideal permeate people who strive in the outside world to survive and get ahead, but that the ideals don’t work. Miller’s salesman is destroyed not by the sons who deserted him but by the business world that deserted him. In Odets’ Country Girl, the theater is taken over by industrialists and money people, who treat artists badly. The outside world has affected the artist, has made him drink, made him think he is a failure. Blanche fails to live up to society’s morals and her own morals, or even Mitch’s morals.

“Society never says ‘You’re a failure’ to rich people. That’s why the playwrights became political. They came out of the Depression and unemployment. The trauma of that Depression will never be fully healed. People were destroyed, the desperation was so widespread they began to understand the politics of it. They saw that while we were going to go to war, we were selling Japan scrap iron to make the arms they’d use to fight the boys we were going to send! It was the unions on the West Coast who said, ‘No, we will not ship it!’ The working class finally took some control of the situation.

“These social playwrights were fighting against that kind of lack of ethics in government, in industry, in the arts. The artists were terribly hurt, then and now, by the politics and militarism of capitalism: ‘We’ll make lots of money selling armaments to anybody who wants them, but there’s no money for artists or poor people.’ The more people suffer, the more they want to revolt. Tennessee understands that. It is implicit in his plays, but he doesn’t push it.”

Note the lengthy reference to the Great Depression, because it is important within the context of these collected lectures.

Stella Adler was a child of the Depression, as were the playwrights discussed in these pages: Tennessee Williams, Clifford Odets, Eugene O’Neill, Arthur Miller, and Edward Albee. She, like they, was deeply impacted by the things she saw and read and directly experienced.

Because of this, and because of the fact that she lived and worked in the same cultural and artistic environment as the playwrights whose work she is dissecting, she has particular insight to offer.

And like all great teachers she shares a great deal about herself along the way, unafraid also to allow her lectures to be filled with anger, jealousy, humor (light and dark)—even that which might be considered pettiness:

“Elizabeth Taylor is beautiful and talented and extremely successful and she married a great and beautiful and extremely successful man. But she is not someone I envy. Something tells me she’s dying inside. It has to do with her standards. Burton is drinking himself to death. I’d accept an invitation to dinner with her—I’d look forward to it. But I wouldn’t think of it as a special treat. I’d rather have dinner with Marlon. Marlon is different. Do you recognize the difference between Taylor and Brando?”

Put the lectures within the context of post-Depression America and the post-War theater, and place actress/teacher Adler in front of a class now comprised of a new generation of readers for whom her words are not audible, but visible, readable and re-readable and what becomes remarkably clear is how vital and how important her words remain:

“You live in a moment when there’s not much to say about the American theater. You are part of a society that doesn’t take theater seriously. ‘Let’s go see Hello, Dolly! Oh, that’s sold out? Should we go see Tennessee Williams? Is that fun? I don’t want to go if it isn’t fun . . .

“It is important to take the theater seriously. There are important people involved. I’m going to make clear to you that theater is an art. It’s hard work, because there is no clarity, no road leading you form one author to another. You are in a mess. Let’s find out how it got itself in such a mess.

“Americans think of theater in terms of success or failure. If a play is successful, we say it is good. If it fails, we say it’s bad. Where I was living in California, I heard a couple of stars talking about a movie: ‘How much money did it make? Did it bring in eighty million?’ They just immediately looked at the figures, because they were on the front page of the Los Angeles Times. “Gee, this one got great ratings and has a big star in it. That one doesn’t.”

It would be an easy enough thing to do to recommend this book to students of theater and what few theater wonks are left among us. That is the obvious recommendation.

But would that this book find a larger audience. Would that it were more universally read.

Among the many things that our recent national financial woes have cost us are the debates that raged a few years ago as to the value of and the appropriate nature of the arts. Sadly that debate has in recent years ceased as the national wisdom now holds that art is something to be joined in times of plenty and discarded in moments of austerity.

That, as Adler would remind us, some of our greatest works of art—notably those of Clifford Odets and Eugene O’Neill—were born during the Great Depression, the ultimate era in terms of cutbacks, seems now beside the point.

Perhaps that is in part what makes these lectures now seem to throb with passion and resonate with meaning. Perhaps it also has a great deal to do with the source of this information, Stella Adler herself, who studied with Constantine Stanislavski and Erwin Piscator, and who taught an entire generation the art of acting—a generation including Judy Garland, Warren Beatty, Elaine Stritch, Robert DeNiro, and, of course, Marlon Brando, who once said about her:

“Stella Adler was much more than a teacher of acting. Through her work she imparts the most valuable kind of information—how to discover the nature of our own emotional mechanics and therefore those of others. She never lent herself to vulgar exploitations, as some other well-known so-called “methods” of acting have done. As a result, her contributions to the theater culture have remained largely unknown, unrecognized, and unappreciated.”

It is hopeful that with the publication of this series of lectures, her work will be made more widely known and universally celebrated.

Most certainly, and actor, professional or amateur, who is about to tackle Blanche or Stanley, or “Doc” in Come Back, Little Sheba or Lavinia in Mourning Becomes Electra or Jerry in Zoo Story will stop by these pages first in order to glean the wisdom they contain.

There have been a great many different acting “methods” taught over the last century, and a great many books published on the theater. Few have been as successful, as acerbic, or as smart as this. And fewer still have gotten the notion of exact nature of the playwright’s art and communicated is as clearly:

“Once the playwright has written the play and the play is here, he’s done his job. It’s closed. It lies there. Then it hangs around for people to see or read or study or act in. It is an extremely difficult literary form, that little play—so few pages. That’s a difficult form and on that’s not understood. He has done his job; then you [actors] come along. You say, ‘What’s my job? You don’t know your job. You don’t even know the name of your job. All you know is, ‘There’s a play—I’ll act.’”

Keep in mind that Adler knew what she was talking about. As few people could, she knew first hand the role of the actor, the playwright, the producer, the director.

She came from a background in Jewish theater and, in part, was responsible for the success of Strasberg’s studio, and was part, with her then-husband Harold Clurman, of the Group Theater.

She acted in films briefly and on Broadway for decades. In addition, she personally knew many of the playwrights whose works and lives are discussed here, giving her the right, not only to teach, but to tattle:

“I am all text, I don’t know anything else. I don’t know how to cook, I don’t sew. I have completely violated my life with this profession and whit these precious few authors who know and write about the world. There aren’t enough writers like Odets and Miller today who can give audiences a real sense of time and place, instead of just a series of jokes. They understand that the last hundred years have not been a joke.

“Some of them have a sense of humor, some don’t. With [Thornton] Wilder, there was so much love and laughter and camaraderie in his characters because of his upbeat philosophy—and in his life. I knew Thornton. He was the most educated man that ever lived but also the biggest clown. I never saw a man make such a fool of himself. Jokes and laughter and imitations. It was really something to be with him. So much fun . . . Arthur Miller once walked into the house, to a party I was giving when I was much younger. Arthur came in, so serious—it was like Death walking in. I wanted it to be a party. I looked around for the maid and said, ‘For godsakes, ask him to leave!’”