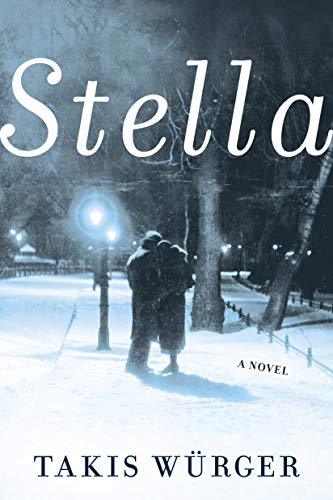 “Stella is not a lengthy book and can be read in several hours. But it packs a punch way beyond its weight. Images from its pages linger—a dark telling of a devastating tale.”

Stella is a hybrid. If we look for genres, probably “faction” is most apt. After the thousands of books and papers written on the plight and annihilation of Jews during the Third Reich, perhaps the only way for 23-year-old author Takis Würger to write this book is to mingle the ordinariness of novelistic young love in decadent Berlin in 1942 (think movie and stage versions of Cabaret) interspersed with an accounting of stark 1942 Western historical events. In doing so, Würger shines a bright, if horrifying, light on an under-acknowledged facet of the Holocaust. Not surprisingly, the critics regarded the novel as highly controversial when it was published in Germany in 2019.

During rationing, onset of air raids, and hatred of Jews, an innocent, wealthy, young man, a Swiss national named Fritz, visits Belin and is almost immediately befriended at a night club by a slightly older German bon vivant, Tristan Von Appen. Soon after, he meets Kristen at the night club, an acquaintance of Von Appen. Fritz falls in love with the blond young woman. If he has suspicions that both are milking him for his money, he never suspects he is under surveillance or that they lead double lives. He showers Kristen with gifts and spends large amounts of money on the black market to obtain the delicacies she and Von Appen love to eat.

Set month-by-month in 1942, midway through this Bildungsroman, protagonist and narrator, 22-year-old Fritz, who says he is in the city to discover the “truth” about what is transpiring in Germany, accepts Von Appen’s invitation, and together with his girlfriend, finds himself at a Nazi celebration. At the banquet, they meet up with Von Appen. Fritz had thought of Tristan as free a spirit as himself but is puzzled to see him dressed in a black SS uniform with the insignia of two lightning bolts. Von Appen describes himself to a puzzled Fritz, as an “Obersturmbannführer in the Schtuzstaffel” (a major in the black-uniformed SS elite corps, self-described “political soldiers” of the Nazi Party). Fritz is aghast that the epicure he thought of as a friend was living a double life amid the mounting horrors of the war.

Fritz’s erotic lover, Kristen, does not appear shocked at Von Appen’s appearance, and says she’s been invited to sing at the banquet. She is one who, when they walked the streets and parks of Berlin together, has shown kindness to random Jews wearing a yellow star on their sleeves. His puzzlement intensifies when he watches Kristen greet famous children’s author, Ernst Heimer, and happily mouth the Preface (above) along with him to his book, The Poisonous Mushroom, (published in 1938). Fritz has vaguely suspected she was somehow involved in the deportation of Jews from Berlin to the concentration camps. Yet she remains an addiction despite his qualms about her mysterious comings and goings in his life.

When, one morning, she drags her badly wounded model’s body to his rooms in a grand hotel, where despite rationing, Fritz continues to buy fine food on the black market, seemingly with an unlimited supply of cash from his doting and dotty father back home on the Swiss family estate. Fritz tends to Kristen’s wounds, and she tells him she was badly beaten and tortured by the chief Nazi guard posing as a gardener in the Jewish ghetto. She shares that her real name is Stella Goldschlag. She is Jewish, her parents are Jewish. Fritz accepts this bombshell not knowing what to do but knowing he cannot give up being with Kristin/Stella. He takes the revolver he has been carrying in his luggage and seeks out her torturer. He confronts him about Kristen’s injuries:

“Hurt who?” Asked the gardener.

“What’s that supposed to mean?”

“How could you beat someone with a rubber hose. Hang her from the ceiling with her arms up raised . . . for hours . . .”

“Well,” he answered. “The Jews have waged war on the whole world for centuries. It’s only logical that now we are fighting back . . . Do you know why they call me the gardener?”

The man explains that it is because he roots out Jews. “An invasive species.”

More bewildered than ever, Fritz pockets the gun and leaves. The man’s parting words ring in his ears. “As for Goldschlag, nobody forces her to do anything. She is, in her own twisted way, truer to the Fatherland than either of us.”

Sickened and nauseated, Fritz rushes away and muses:

“I was a young man from Switzerland who missed his father, who loved a Jewish woman, and whose most courageous act was to carry an old billy goat down a mountain. I didn’t understand what was happening in Germany, why Jews had to be hated, and why I had been drawn into this war.

“But I knew on this day that I had never been invisible.”

Later Stella reveals that her parents were in the ghetto and she was with “the gardener” to prevail on him for help in assisting them leave Germany.

At her behest Fritz re-engages with the man, and knowing from Stella that the man loves pork, he bribes him with the finest black-market pork. The pork is delivered, Stella’s parents leave the ghetto, but instead of escaping are forced onto a train to the Auschwitz concentration camp, where both are murdered.

Fritz and Stella’s affair ends on New Year’s Eve, 1942. Disillusioned, he returns to the family estate in rural Switzerland. Eventually he marries, has children, and lives a satisfying country life. But he never forgets Stella or his year in Berlin. He is haunted by Tristan Von Appen’s reply, when he asked him at the banquet if he is a Nazi supporter:

“When the storm trooper faces the fire,

It fills him with delight.

And when Jews’ blood

Streams from the knife, then everything is right.”

Additionally, interspersed, amid the fictional story are one-page italicized accounts (court documents) signed by trial witnesses that describe the betrayal and subsequent removal of Jewish families to concentration and labor camps. These are a telling record of many Jewish families sent to camps simply because they were Jews or suspected of aiding other Jews to escape. Each account mentions a young woman, a blond onlooker.

Stella is not a lengthy book and can be read in several hours. But it packs a punch way beyond its weight. Images from its pages linger—a dark telling of a devastating tale that deserves a place alongside The Reader by Bernard Schlink. Schlink’s novel is another tale of post-Nazi Germans attempting to reconcile themselves with the national guilt still experienced from their Nazi past.