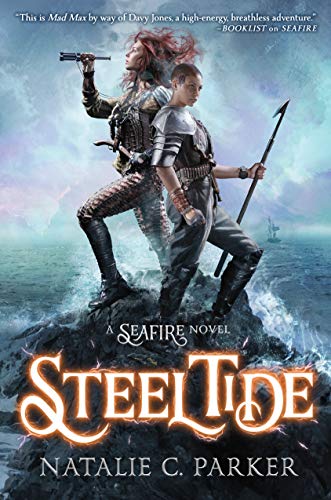 After nearly dying at the hands of the ruthless Fiveson Lir, Caledonia is found and nursed back to health by a crew of former Bullets who now call themselves Blades. Having escaped the clutches of the brutal warlord Aric Athair by deserting from his service, the Blades live a nomadic existence, ready to flee at the first sign of trouble.

Caledonia’s ship, the Mors Navis, has sailed on without her. As she recuperates, Caledonia wants to do more than run away like the Blades. She wants to reunite with her crew and take down Aric. Her first step is to convince the Blades to help her capture a Bullet conscription ship. Their mission succeeds, but then Caledonia learns that Bullets have captured the Mors Navis and her crew has been imprisoned in Slipmark, one of Aric’s notorious port cities.

“The sun dipped toward the western seas, unsheathing Slipmark like a knife . . . . Staring at it now, she couldn’t shake the feeling that Slipmark was a trap and as of this moment, she had no idea how she planned to escape it.”

Impersonating a crew of Bullets in their stolen ship, Caledonia and the Blades sail into Slipmark. For a while, the deception holds. But when Caledonia sees the public torture of Oran, a former Bullet she has feelings for, she can’t help reacting, which calls attention to herself. With the help of a disgruntled Bullet, she hatches a plan to rescue Oran and her crew from a watery torture chamber. Escaping Slipmark by the skin of their teeth, Caledonia and her crew are nearly sucked into a whirlpool, and then their ship is attacked by deepships, near-legendary submersible vessels.

At last, Caledonia sails her battered ship into the city of Cloudbreak, run by a semi-independent ruler called Hesperus. After some tricky negotiations with Hesperus, dubbed the Sly King, she guesses correctly that the deepships were his, attacking what they thought was a Bullet vessel. The two leaders form an uneasy alliance against Aric, and prepare to take the fight to him.

Parker’s tale is marked by explosive action sequences worthy of a Hollywood movie, emotional firestorms between Caledonia and her sisters, and fanciful descriptions of the post-apocalyptic world they inhabit. The book is full of choice lines like, “He had a crown of blond hair and a face like a collection of knives.” Or this passage, when Caledonia hears the voice of her enemy, Fiveson Lir, on the radio:

“The voice was silk behind static, a smile beyond a fogged up windowpane, and it slipped beneath her skin like a thin sheet of ice.”

Those new to Parker’s series will enjoy Steel Tide as a standalone novel. Those familiar with Seafire will revel in it, while waiting eagerly for the trilogy’s conclusion.