Stealth of Nations: The Global Rise of the Informal Economy 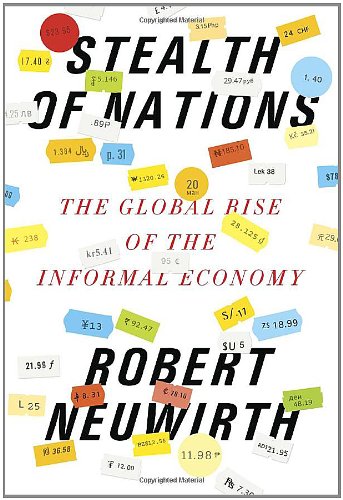 “Mr. Neuwirth seamlessly blends history and economic theory in with his narratives, . . . This is a fun read, and not just for professors of political economy. It will engage the reader who likes Jane Austen with stories of real people who are struggling to make their way in life, and it will engage the reader who likes Michael Lewis with the highest standard of financial journalism.”

When my great grandfather immigrated to Burlington, Vermont, from Russia at the beginning of the last century, he made his livelihood by going door to door and selling shmates (Yiddish for clothing, literally rags).

Eventually he saved up enough for a horse and cart. Then he managed to set up a network of storehouses around the state so he could sell in different communities. He rented a store in a section of Burlington that is still known for its immigrant population. And by the end of his life he saw his sons transform the business into one of the first discount “box” stores in New England.

That was the American Dream. Today we would describe it as going from the informal to the formal economy. The informal economy has always been an important part of our society, and in less developed nations it constitutes the bulk of economic activity.

Like individuals, nations seem to go from informal to formal; and as market forces metastasize unevenly around the world in the current wave of globalization, the informal economy describes how a majority of people on our planet conduct commerce.

In The Stealth of Nations, journalist Robert Neuwirth tells the interesting story of this economy. He prefers to call it System D, a phrase that originated in Francophone Africa and Caribbean, and the name by which it is known in most of the world. (A débrouillard is a resourceful person, and l’economie de la débrouillardise became système D).

System D basically means any economic activity that evades government control. It can range from an unregistered business, such as a door-to-door peddler, to small businesses that do not comply with all regulations, tax cheats, smugglers, pirates, and trade in goods and services that are illegal.

So the woman in Ziguinchor, Senegal, who sells antibiotics one pill at a time from an open air table, and a pharmacy in Canada that ships the same prescription drug to Americans, and a U.S. business that sells Indian versions of a drug still under patent protection, and your friendly neighborhood pot dealer—all are considered System D.

By some estimates, System D accounts for as much as eight percent of annual economic activity in the United States alone, where it is not considered a major part of our economy. In places like Nigeria, nearly the entire economy is System D.

One study estimated that the size of the global informal economy in 2003 was $14 trillion, and as it is growing faster than the rest of the world economy, it must be close to $20 trillion today.

It is an important an interesting topic, and if you think a book about it is best left to economists in the ivory tower, think again and look at Robert Neuwirth’s work. He narrates the stories of System D around the globe, using real characters who we come to know and feel for.

Rua 25 de Março in Brazil, an open air market, is his first stop. From there he goes to Lagos (which in and of itself demonstrates impressive valor—Lagos is a scary place), and interviews debrouillards ranging from guys who shake down unofficial taxi vans to people who search for value in the trash of municipal dumps to resellers of car parts, cell phones, food, and much more. Lest you think that this kind of market activity is primitive, Mr. Neuwirth takes us to the biggest computer and electronics district in West Africa, and he explains how it works.

From Nigeria we go to China, which is both a source of many goods for System D (and for the regulated economy, too). Here we find knock-offs and counterfeits, ranging in legality from outright frauds to cell phones branded “Sansuung” and “Motorloa,” and Sany Erickson.”

In the garment district of Guangzhou (Canton) on can find Hogoo Boss, Zhoumani, Verscc and S. Guuuci. But many companies in China are not simply suppliers to System D: They are also a part of it. They avoid regulation, licensing, and taxes.

We should not think of this as a foreign phenomenon. Stealth of Nations tells stories in Brooklyn of bakers who start in their kitchens, and their expansion is limited because they cannot afford to pay for licensing, health code compliance, and taxes.

Americans are likely to know the story of two Californian computer kit enthusiasts, who started a business selling phone phreaking equipment from their garage, progressed to the Apple Computer, and eventually became on of the largest corporations on earth. But such a story is very unusual, and we are much less likely to know about the many people who never make it out of their garages.

Mr. Neuwirth seamlessly blends history and economic theory in with his narratives, and concludes by considering some of the policy challenges and implications for those who would regulate markets. This is a fun read, and not just for professors of political economy. It will engage the reader who likes Jane Austen with stories of real people who are struggling to make their way in life, and it will engage the reader who likes Michael Lewis with the highest standard of financial journalism.

Where I live, Stealth of Nations is not yet available except in its official version from the publisher (though the author does briefly touch on reviewers who sell their advance copies to the Strand Bookstore in New York). I recommend you buy the authorized version and live System D through its pages.