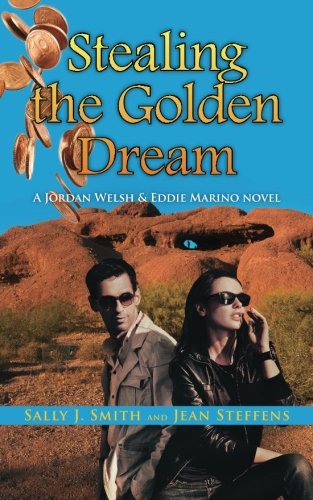 “smart plot told at breakneck pace with a fair share of red herrings thrown in to keep the brain busy.”

Stealing The Golden Dream is the second in the successful Jordan Welsh and Eddie Marino private investigators series by writing duo Sally J Smith and Jean Steffens. Stealing the Moon and Stars was the first to introduce us to the Scottsdale PIs.

Jordan and Eddie are hired by the Arizona Heritage Museum to guard the multimillion-dollar Dahlonega Golden Dream Coin Collection, the rarest of its kind in existence. When the collection is stolen out from under them and a loved and trusted colleague is murdered, it’s a strike at the very heart of the agency, placing its stellar reputation on the line.

To make matters worse, the finger of blame has been firmly pointed at Eddie. With his checkered past of involvement with criminals and other shady characters, some people suspect that his guilt is not beyond the realms of possibility. Years ago, Eddie worked for Cleveland crime lord, Anthony Vercelli, a name that keeps popping up in his life.

Soon after the robbery and murder, Eddie is arrested and charged, and it’s left to society girl and partner Jordan to find him a high-powered lawyer to arrange bail. But is Jordan fully convinced Eddie has turned his back on the past? Or do niggling doubts remain, even when she finally manages to bail out Eddie from the local jail?

“She held him in her arms, trying to ignore the odd clinging to him. ‘You okay?”

‘I’m good. Not like it’s my first time in jail,’ he said quietly.

“But he was done with the mob, had been for a while. She wanted to think he was a different man now . . .”

Now that he’s out on bail, it soon becomes clear to Eddie that he’s being targeted because of his former association with Vercelli. But is Vercelli involved in what happened at the Arizona Heritage Museum? Is this Vercelli’s revenge on Eddie for turning his back on him, all those years ago? And just how far is Jordan willing to save Eddie from the echoes of his criminal past?

When Eddie’s mother, Mama Rose, is kidnapped, the duo soon realize that it’s not just their own lives in danger, but also the lives of their loved ones. And when the kidnapper asks not for money, but for a simple swap—Mama Rose in exchange for Eddie—time starts running out for one part of the PI team. . . .

Stealing the Golden Dream is a worthy follow-up to Stealing the Moon and Stars. A great series and smart plot told at breakneck pace with a fair share of red herrings thrown in to keep the brain busy.

Eddie and Jordan are great characters, sexy, tough, intelligent, and witty. The saying that opposites attract is a perfect description of their relationship. They are supported by a terrific cast of villains and heroes, and the great landscape of Arizona thrown in for good measure adds extra weight to the enjoyment and thrill. Stealing the Golden Dream is the perfect companion for the beach, planes, trains and everything else in between.