The State Counsellor: A Fandorin Mystery 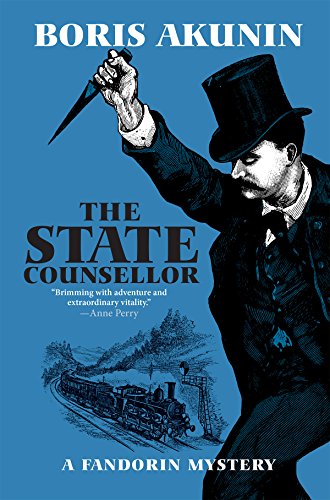 Erast Petrovich Fandorin is a unique detective. While other fictional sleuths are openly eccentric (see Sherlock Holmes’ Persian slipper full of tobacco or Philip Marlowe’s solitary games of chess), Fandorin is neither purposefully odd nor a romantic loner. This stuttering Russian detective is, officially, a functionary of the Tsarist government. He works, in a roundabout way, for the Romanovs. However, what makes Fandorin weird is his forthrightness—his love of justice and his belief in fair play.

In 19th century Russia, these are highly unusual traits indeed. In The State Counsellor, Fandorin’s honesty is put to the ultimate test. In this romping yarn, Fandorin, as Deputy for Special Assignments in the ancient city of Moscow, is pitted against two enemies: nihilist bomb throwers who believe in using violence to usher in their socialist utopia and the corrupt police agencies tasked with keeping everyday Russians alive.

The fuse for this tale is lit when an anarchist assassin kills the new governor general of Siberia, Khrapov. For his torture of a female revolutionary, the Combat Group terrorist organization has marked him for death. Led by the steely eyed and cold-hearted Green, the CG takes Khrapov out in a secret train traveling from St. Petersburg to Moscow. The mission is carried out discreetly, with Green disguised as none other than Fandorin.

Green’s guilt is not in question. Neither is Fandorin’s. The mystery lies in the identity of “TG,” the unknown letter writer whose missives tip off the nihilists to every movement of important Moscow officials. It is clear that there is a dangerous mole working within the heart of Moscow’s security apparatus. Is it an Okhrana officer or a noble prince with novel ideas about Russia’s future? Could the terrible “TG” be none other than a beautiful double agent? It is up to Fandorin to find out.

The State Counsellor, like the other Fandorin novels, is a relentless page-turner. The 19th century that Mr. Akunin depicts is pulsing with irresistible energy. From dastardly terrorists to sultry femme fatales, Akunin’s Moscow is a porto-noir paradise cut through with a decidedly Russian sense of futility.

This black humor has much to do with Tsarist Russia’s last days. Even though the characters do not know it, there seems to be a subtle recognition in all of the Fandorin novels that things cannot last as they are. In The Diamond Chariot, Russia’s disastrous defeat during the Russo-Japanese War signals that that age of St. Petersburg’s Eurasian empire is almost over. Similarly, The State Counsellor, which focuses so heavily on government corruption, points the way towards domestic revolution.

At its root, this fun and entertaining detective novel actually poses a very serious question: is corruption justified if its enemy is a thousand times worse? As bad as the Tsarist system is, is it worth fighting for if the alternative is a nihilist state built upon the blood of the innocent? As is always the case in Russia literature, The State Counsellor tackles heavy philosophy in between shootouts and narrow escapes.