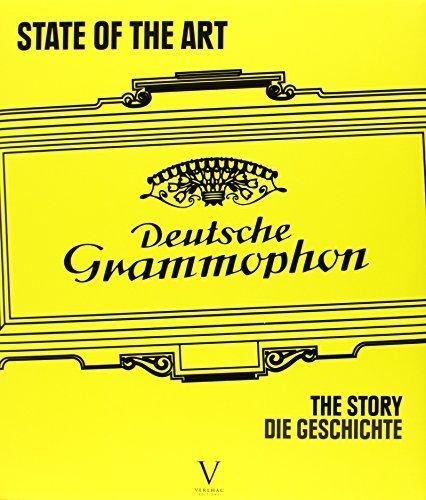 If a record label could have program notes to describe its history and catalogue then this book would be it (and it has pictures for the kids![1]). In looking at the standard canon of Western music, many of the great artists were German: Beethoven, Schumann, Brahms, Wagner, Bruckner, Strauss, and Schoenberg. So it only makes sense that a prominent classical music label would arise to present their music to the world.

Started in 1888, by Emile Berliner with his invention of the gramophone [2], Deutsche Grammophon began its long life as one of, if not the, premiere classical music record label in the world. Ownership of the label has changed hands several times over the company’s 112-year existence (DG is now a subsidiary of Vivendi’s Universal Music Group), but one aspect of the label’s identity still remains the same: the ubiquitous Yellow Label. Much like the Golden Arches denote a quality hamburger [3], DG’s Yellow Label is a sign of quality to classical music lovers around the world.

Anyone who was/is anyone recorded for Deutsche Grammophon at some point in his/her career. The two most notable names being Leonard Bernstein and Herbert von Karajan, with the latter selling over 100,000,000 recordings![4] Bernstein was actually an exclusive DG artist—which is almost unheard of for a conductor/composer of his caliber. By comparison, Karajan was also an “exclusive” Deutsche Grammophon artist, but he was also exclusive with EMI and other labels as well (ah, the many perks of fame).

The book not only includes photos of these famous faces, but also two CDs of their work. Do not look to the CDs to be comprehensive. They function more like a DG greatest hits collection, pulling movements from major works and placing them next to shorter favorites. The sound quality, as usual, is outstanding.

Deutsche Grammophon has long been known for high quality packaging, artwork, and booklets, as well. This collection is no different. There are some issues with layout, however. If one is looking for a narrative to follow—keep looking. This work functions more like a scrapbook with essays and pictures mixed together. Sometimes a sentence will not end at the bottom of the page, only to be found after several pages of photographs. Also, some captions are not on the same page spread as their pictures, making identification challenging. But this is getting REALLY picky (as all great classical musicians do[5]).

The Yellow Label has a long and storied past; however, with the decline of the CD and no decisive media set to take its place, the future is wide open to record labels that can adapt and find new markets. Will Deutsche Grammophon be one of them? Only time will tell, but the company certainly has a solid foundation upon which to build.

[1] For some reason the writers of this book made free use of the exclamation point! Maybe they were just that excited about the music!
[2] Gramophone translates into German as grammophon, hence the label’s name, Deutsche Grammophon.
[3] OK, feel free to argue the use of quality, but the consistency of food between restaurants and recognizable brands is undeniable.
[4] Now that deserves an exclamation point!
[5] Not saying that I am a great classical musician—just making a point.