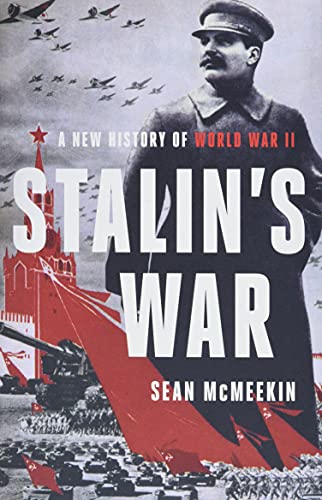 “revisionist history at its finest, offering a compelling narrative of the neglected factors that brought about the century’s bloodiest war, convincingly making the case that Stalin was nearly as culpable as Hitler in launching this conflict for his own reprehensible purposes.”

Every once in a while a book comes along that can simultaneously educate, infuriate, and astound you as it upends everything you thought you know about a subject. Mr. McMeekin has written an astonishing recasting of World War II that truly revises some of the accepted historiography of that war.

Unlocking the secrets of Soviet, Russian, and Western archives, the author offers a harsh and overdue examination of the role Josef Stalin played in starting World War II, the brutal conquest by Stalin of his neighbors Poland and the Baltic States, and the complete duplicity of the Soviets in dealing with their erstwhile Western Allies in the fight against Hitler.

McMeekin begins with an examination of Soviet foreign policy prior to 1939, emphasizing the desire of the Communist rulers of Russia to support world socialism and the demise of their capitalist foes in Europe. However, the really eye-opening story begins with the Molotov-Ribbentrop Pact, which clears the way for Germany to invade Poland and begin World War 2. This was Stalin's overarching goal, letting the capitalist countries grind through another war of attrition and pick up the pieces of a shattered Europe.

After Hitler and Stalin divide a conquered Poland, McMeekin places into strategic context those always overlooked events in Eastern Europe from September 1939–June 1941, when traditional Western histories are focused on the fall of France and the Battle of Britain. As the author points out, Stalin conquered nearly as many countries as Hitler, absorbing the eastern half of Poland, the Baltic states, fighting a war of conquest with Finland, and annexing chunks of Romania. The naked Soviet aggression against Finland nearly brought Britain and France to

declare war on Stalin, a fascinating contingent scenario that only ended when Hitler invaded France in May 1940. The author does a superb job of showing how Stalin deceived and played all the major European powers to advance the interests of the Soviet Union.

In the months leading up to the launch of Operation Barbarossa, the author offers some tantalizing hints that Stalin was possibly preparing to attack Hitler's economic lifeline by invading Romania and the Balkans. When the Germans invaded the Soviet Union, Stalin's vaunted war machine crumbled, leading to the near annihilation of the Red Army and bringing the Germans to the gates of Moscow. As Stalin and the Communists stood on the brink of defeat, their salvation came from the very capitalists they despised, Britain and especially America.

This is the really infuriating part of the book as the author meticulously lays out how Stalin lied, deceived, cheated, and spied on the very countries that fed and equipped a huge portion of the Red Army for the entire war. If you doubt that the American and British governments were thoroughly penetrated and influenced by Communist agents in the 1930s and 1940s, McMeekin will put those doubts to rest. Beginning with the Cambridge Five (actually Seven according to the author), and continuing to American spies like Alger Hiss and the most damaging mole of all, Harry Dexter White, the author shows how the collusion of all these traitors with Stalin actually influenced American policy during the war to the detriment of the West.

The reader is left even more astonished to see the naïve and almost obsequious behavior of FDR and his primary advisor Harry Hopkins toward Stalin and the Soviets. One almost wonders if Hopkins, acting as FDRs virtual major domo in the war, was actually a Soviet agent as he shipped billions (in today's dollars) of aid to Stalin—even to the detriment of the U.S. military—and gave Soviet spies practically free reign to steal American technical and industrial secrets, including material related to the atomic bomb. The statistics of the largesse that was provided to Stalin via the Lend-Lease program is almost inconceivable, all of which was never even asked to be repaid to the American taxpayer.

The truly sad narrative comes when Stalin diplomatically bullies the West throughout the war, callously exploiting FDR's guileless desire to make a personal connection to Stalin and his almost catatonic, as the author states, actions at the Yalta wartime conference. This conference, long considered the low point of Western betrayal of post-war Eastern Europe, was the nadir of FDR's legacy. The clearly declining president fails to force any real concessions from Stalin for Eastern Europe, condemning Poland and other states to another 50 years of Communist rule.

Of course, Stalin steers his own course in Asia as well, signing a non-aggression pact with Japan in 1941 to encourage their upcoming war with America and Britain. Once it is convenient, the Soviets break the pact to invade Manchuria and aid the Chinese Communists, ensuring the fall of China to communism in 1949.

Throughout this era, Stalin was focused solely on the interests of the Soviet Union and showed a ruthlessness and thirst for conquest no less evil than Hitler. But because the Soviets were an ally of convenience from 1941–1945, many of their horrendous crimes—such as the Katyn Forest massacre of over 15,000 Polish military officers and other officials in 1940—were deliberately covered up and dismissed for decades.

In many ways it was truly Stalin's War and only the dreadful losses suffered by the Red Army and Russian people, combined with the technological and economic advantage of the West, including the atomic bomb, kept Stalin from his goal of total Soviet hegemony in Europe after the war.

This book is revisionist history at its finest, offering a compelling narrative of the neglected factors that brought about the century’s bloodiest war, convincingly making the case that Stalin was nearly as culpable as Hitler in launching this conflict for his own reprehensible purposes.